On a small rocky outcrop, Kisimul Castle, a stronghold Of the Clan MacNeils since the 11th century, guards the bay. The castle consists of a strong square keep at one end of the small island, with a high curtain wall around the courtyard. The castle was built with comfortable defence in mind, with its two artesian wells and a fish trap in a basement. The castle was equipped to fend of any attack using a small ship that was permanently berthed alongside the castle walls. At the first sign of trouble, the ship was to be launched by its crew and sent to see off the attackers. 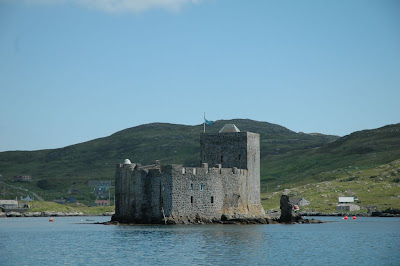 The castle’s walls range from 4 to 7 feet in thickness, and are about 50 feet high. There is evidence to suggest that the walls were raised to their current height some time in the past. The keep, situated at the South East of the island, is four storeys high, with walls of 6 feet in thickness. 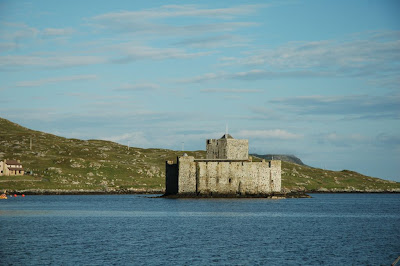 In 1838, the 21st chieftain of the Clan MacNiel was forced to sell Barra, including the castle, and it wasn’t long before the structure was in ruins, with some stone from the castle allegedly turning up in Glasgow as paving stones. In the late 1930’s, Robert Lister MacNeil, the clan chief at the time, purchased the castle. By the time he died in 1970, the castle had been restored to its previous condition. Robert’s son, Ian Roderick took over ownership of the castle, and in March of 2000, it passed into the care of Historic Scotland for a 1000 year lease, with a ground rent of £1 and a bottle of whisky per annum.
Photos courtesy of John Jefferies.
Posted by The Cumbrian Castle listing. at 5:12 pm