Gylan Castle has seen better days. The ruins are now roofless, and a certain amount of consolidation work has recently been undertaken to ensure the castle’s survival. The ruins lay on the South West of the Island of Kerrera, at the foot of Cnoc Biorach, guarding the bays of Port a’ Chaisteil and Port a’ Chroinn. The tower was probably completed sometime around 1582, and was a base for the MacDougall clan. The tower was probably situated on the South West of Kerrera to provide cover for the Southern approaches to Oban through the Sound of Kerrera. 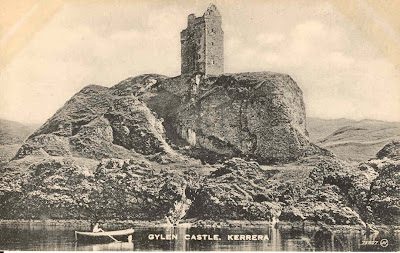 Above. Gylen Castle from the West (from personal collection) 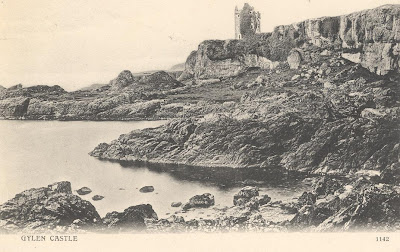 Above. Another view of Gylen Castle, this time from Port a Chroinn (from personal collection) 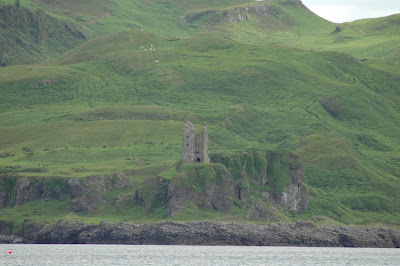 Above. Gylen castle from the South West.
The surviving remains consist of the main block of the tower, which is built in an L shape, and stands to four storeys. The stair tower can still be seen jutting out of the West angle of the tower. The walls of the tower still have a variety of small windows, shot holes and gun loops. The entrance defences still survive, and consist of two 1 metre thick, parallel walls that contain loop holes and still stand to around 2 metres in height. These walls lead into a vaulted passageway and then into a small courtyard which in turn is protected by the cliff faces below it.
In 1647, General Leslie laid siege to the castle, and when he gained entry, had the tower burned. It’s likely that it was never inhabited after this. The extent of the damage caused by General Leslie’s sacking of the tower were evident when it was excavated in 1988. There were soot and ash marks up all the internal walls, layers of burnt timbers and straw on the floor of the tower and the slate roof, now lying on the floor, was reddened from the heat of the blaze.
Following the recent consolidation, the tower has been rescued from its slow demise, and visitors setting foot on Kerrera can now even enter the tower to view it.
Photo courtesy of John Jefferies.
Posted by The Cumbrian Castle listing. at 6:57 pm