Castle Stalker, or Stalcaire in Gaelic, lays at the Southern entrance to the Sound of Shuna, and in the Western end of Loch Laich. It is built on a rocky outcrop called the Rock of the Cormorants. The site is thought to have been occupied by a smaller defensive building from the 1320’s, when the MacDougalls were Lords of Lorn. The MacDougalls lost the title of Lords of Lorn when they were defeated by King Bruce at Brander Pass in 1308. The title was regained briefly by the family, but lost again in 1388, with the title passing to the Stewarts. It’s thought that the building we see today, was built by Sir John Stewart in around 1446. 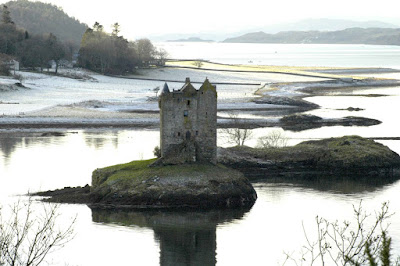 The castle was reputedly a frequent haunt of King James IV of Scotland, who used the castle as a base for hunting trips to the Highlands. The addition of the top floor and the roof were probably due to the Royal visits, and a coat of arms that survives over the front door of the tower is probably the Royal arms. 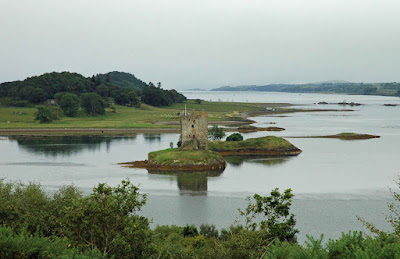 The castle really is a simple structure, consisting of a four storey keep, accessible through a doorway on the first floor at the top of a flight of stone steps. Its main defensible qualities come courtesy of the fact that it is difficult to reach, accessible only usually by boat, and on foot at low tide.
An interesting note: the castle may be familiar to Monty Python fans, as Castle Aaaaaaaargh, the likely resting place of the Holy Grail. King Arthur and Sir Bedevere attempt to storm the castle but are beaten back by the French who have occupied the castle and drive them away by throwing farm animals at them.
Photos courtesy of John Jefferies
Posted by The Cumbrian Castle listing. at 8:50 pm