Stramongate Bridge carries the A6 (Stramongate) over the River Kent and joins New Road with Wildman Street. The bridge is a medieval four arched construction, made up essentially of three road bridges amalgamated into one. 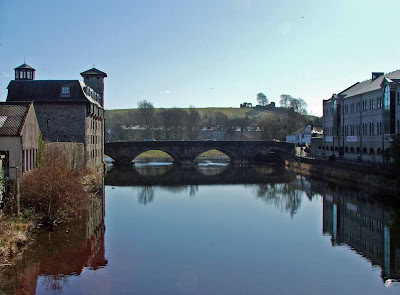 Above. A view of Stramongate Bridge from Victoria Bridge to the North West.
The original bridge is thought to date from the 14th century, although the middle section of the current bridge dates from the mid to late 16th century. It would appear that the original bridge was so well made, that when it was in need of repair, it was easier and cheaper for the town to build onto it rather than demolish and start again.

Above. Stramongate Bridge from below the weir, looking North West.

Above. The same view as the post card shown below. 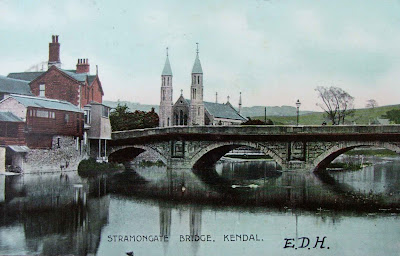 (Postcard from personal collection)
The above postcard, shows the bridge as it would have looked in the late 1800's (?) The church of St George still has its tall spires (now removed) and the building that is now the River Side Hotel, is the tannery. 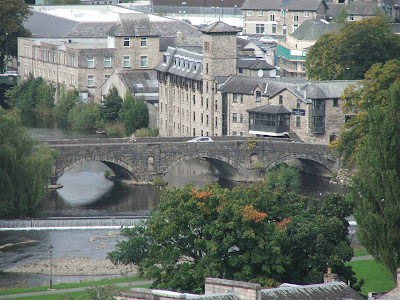 Above. Stramongate Bridge from Castle Hill to the South.
The original design of the bridge incorporated steep approaches to the North and South ends, which caused problems in wet weather for horses hauling heavy carts across it. The approaches are still quite steep however.
In 1794, the bridge was found to be in a poor state of repairs. Kendal Corporation decided that they would build a new wider bridge. 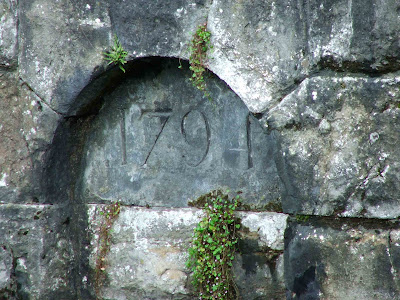 Above. The date stone celebrating the rebuilt and consolidated bridge.
Unfortunately, as the bridge was so well constructed it had to remain in situ.....which meant that an additional single track bridge was built each side of the original 'pack horse' bridge. The original structure was therefore encased in the new bridge. 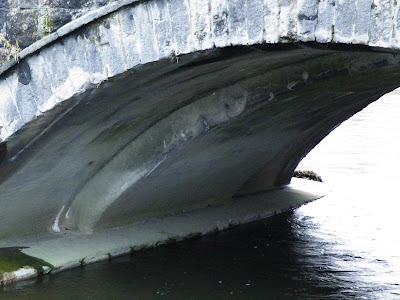 Above. The underside of one of the arches showing the original pack-horse bridge.
The photo above, clearly shows the position of the original medieval bridge, sandwiched between the two late 18th century additions. From this, the narrowness of the original bridge is clearly visible....far too narrow for modern traffic requirements!

Above. A panoramic view of Stramongate Bridge from Goose Holme.
Before the bridge was built, as at Nether Bridge, a ford would have been used to cross the river. The ford was situated at the South side of the bridge, and would have crossed where the Bridge Hotel is now situated. The ford was the site of the town's ducking stool, or the 'Cuckstool' overlooked by a watchman's box. The ducking stool was used to punish 'scolding women' who were treated the same as those who broke the peace.
Posted by The Cumbrian Castle listing. at 6:51 pm