Brougham Castle lies on the South side of the A66 about 2 miles South of Penrith. The castle is situated in an area rich in archaeological sites….castles, towers, earthworks and ancient churches.

The site was originally fortified by the Romans, who built a fort here between the 2nd and the 4th centuries. The remains of the fort, Brocavum, can still be seen as distinct earthworks, ditches and banks forming a large square enclosure beneath the castle remains. The fort can best be seen from the B6262, as here there are no castle remains and the Roman banks and ditches have survived to around three feet in some places. 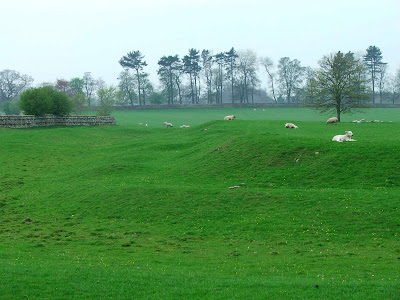 Remains of the Roman fort.

The castle is built in the North Western corner of the old Roman fort, and is thought to have been built some time (or continuously) between 1203 and 1228. The original defensive structure would have consisted of a keep and moat. In around 1246, Robert de Vieuxpont acquired the site and pressed it into service protecting King John’s northern lands against the Scots.. The castle benefited from natural barriers. The site is protected on the North and West sides by the River Eamont and Lowther, although this element of defence has contributed heavily to the destruction of some of the outer walls and earthworks due to water erosion. This part of the river floods all too easily. The castle would have offered good protection for the river crossings and the roads running North to South, and East to West.

Robert de Vieuxpont’s castle consisted of a stone keep together with some service buildings and a wooden palisade, but this was replaced with a stone curtain wall in around 1300 further strengthening its defensive qualities. It was at this time that the castle was governed by Robert Clifford. Robert’s father was the Lord of Brougham, a title he gained when he married Robert de Vieuxpont’s great granddaughter in 1268.

Robert Clifford found himself heavily involved in the Scottish wars from 1296 onwards. He was mainly responsible for work carried out on the gatehouse complex, the top storey of the keep, the addition of the Tower of League in the South West corner of the bailey, and the addition of more stone curtain walls. 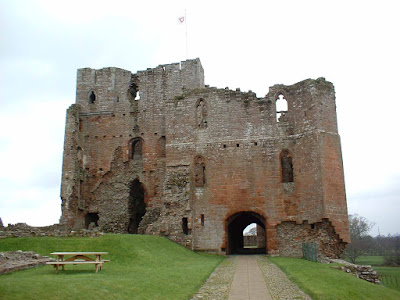 Such were the formidable defences at Brougham, it was deemed safe for Edward I to spend a night within its walls on the 22nd July 1300. An event that would have added much to the importance of the castle.

The 1340’s saw more work carried out on the castle by the Clifford family. This time it was Roger Clifford, grandson of Robert, who built the Southern portion of the curtain wall, and added a new Hall to the range of buildings. A small weather worn plaque can be seen embedded high up in the external wall of the gatehouse, signifying his importance to the castles beefed up defences. It reads “Thys made Roger”. The works that Roger carried out however, could not stop the castle being captured and sacked by the advancing Scottish army in 1388. Some records seem to indicate that it was around 33 years, in 1421, before the castle was back in use. The damage must have been severe indeed.

During the Wars of the Roses, the Cliffords, who still owned the castle, fought on the side of the Lancastrians. Local rivals, the Nevilles, fought on the side of the Yorkists, and clashed on a few occasions with their Northern neighbours. When the Lancastrian cause was lost, the castle at Brougham was granted to the Nevilles by Edward IV in 1461, as recognition of their dedication to his claim to the throne. It wasn’t until Henry VII gained the throne, that the Cliffords regained the castle. From then on, the family prospered under Tudor rule.

During George’s ownership of the castle, the site was unfortunately neglected. George spent most of his time at court in London where he was Elizabeth I’s champion. A 1595 inventory of the castle, states that the building was in a poor state of repair, with many of the rooms sparsely furnished, with some others full of rubbish. When George died in 1605, the castle became the dower-house of his widow, Countess Margaret. She died in 1616. A year later, in 1617, James I visited the castle, spending two nights there. It’s quite likely that the expense of entertaining the King was enormous.

During the 1640’s, as the Civil Wars raged across England, Brougham was garrisoned by Royalist troops. However, it played no part in the wars.

After 1650, Lady Anne Clifford gained control of the family fortune and the many properties throughout Cumbria. At Brougham she built a bake house and a brew house, and had substantial gardens laid down on the South side of the castle. These took the form of a huge walled garden, the earthwork remains of which can still be seen. She paid many visits to the castle during this period, spending many weeks and months there. Lady Anne died on the 22nd March 1676 at Brough Castle. The castle was maintained for a few years after her death, with a man paid to clean the roofs and keep the rooms tidy. This arrangement finally ended in 1714.

By this time, the Earl of Thanet, Thomas Tufton had decided that he didn’t need all of the ancestral homes that had been left to him. He made Appleby Castle his prime residence, and set about selling and dismantling the other properties. He sold all the furnishings and fittings at Brougham in 1714, leaving only the Tower of League furnished. He raised the grand total of £570. In 1723, even the Tower of League was sold, raising £40 5s. 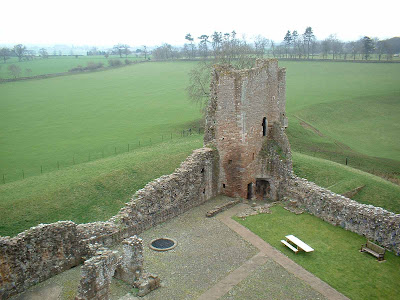 The castle, neglected and empty, quickly fell into ruin. In the late 1840’s, the Earl of Thanet carried out some half hearted repairs on the remaining structure. His successors, the Lords Hothfields however, decided that the cost of maintaining the castle was too much, and the cash dried up.

By 1859, cattle were seen to be grazing within the huge gatehouse. There were a few visitors to the site, and they frequently complained about the poor state of the castle.

In 1928, the castle was placed in the ownership\guardianship of the Ministry of Works. Much of the 1840’s repairs were undone, with the masonry put in place by the Earl of Thanet removed. The castle was returned to its original Lady Anne Clifford form. 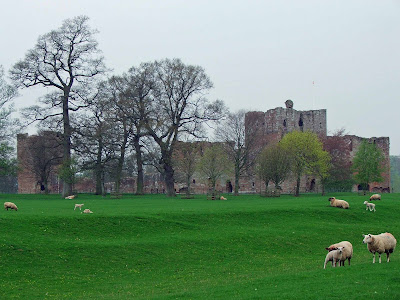 Today the castle is in the excellent guardianship of English Heritage. The castle is open from April to September, and through the whole of October. Well worth a visit.

Posted by The Cumbrian Castle listing. at 1:46 pm