Miller Bridge
Kendal
Cumbria
There were a number of bridges, all made of wood, that stood on the spot that Francis Webster's three arched bridge now occupies. All were carried away in floods until in 1743 the town finally built a stone bridge to withstand the frequent floods.
The present bridge joins Gulf Road and Lowther Street with New Road and Aynam Road, and provides access across the river to the town from the East banks of the Kent. 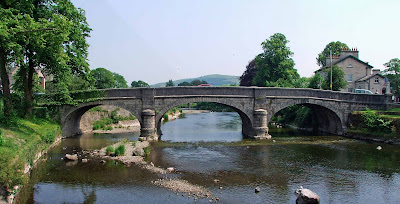 Above. Miller Bridge from the West.
The planning and building of the new bridge by Francis Webster, would put most planning and building projects to shame. On the 13th of April, 1818, Francis Webster was approached by the Kendal Corporation appointed Lancaster Canal Committee, to submit plans for a replacement bridge of the Kent. He was instructed to prepare plans for a bridge, and to advertise for contractors to be ready to build the bridge by the 4th of May that year. Webster submitted plans for a three arch dressed stone bridge with a total span of 130 feet in under three weeks!!! 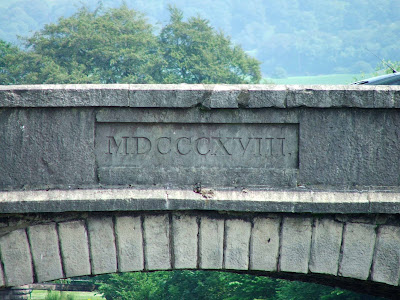 Above. A close up of the date stone on the West face of the bridge.
Prices quoted for the building of the bridge, ranged between £797 and £1500. It was decided that Edward Gibson and Jas. Harrison, stone masons, would build the bridge, at the price of £888.
The foundation stone was laid on the 20th of May 1818 by Francis Webster the designer and also Alderman of Kendal at the time. The bridge was opened to traffic in November of the same year. It took a mere 8 months to plan, organise and build the bridge. 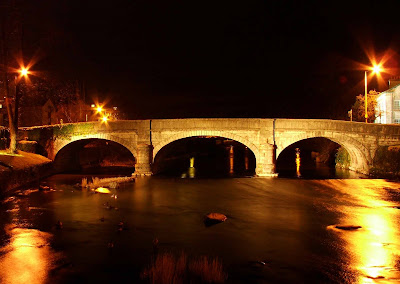 Above. Miller Bridge from the West at night.
Officially, it was called Kent Bridge, but in 1833, when John Wood produced his map of the town, the bridge had been named Mill Bridge. By 1877, it had become known as Miller Bridge. The latter names has stuck.
An original rough pencil sketch of the bridge by Francis Webster survives to this day, although the actual plans have long since vanished.
Posted by The Cumbrian Castle listing. at 6:21 pm