Alnwick town gate\Hotspur Gate\Bondgate
Alnwick
Northumberland
Otherwise known as the Hotspur Gate or the Bondgate, Alnwick's sole surviving gate house sits at the junction of the aptly named Bondgate Within and Bondgate Without, Hotspur Street and Greenwell Road, South East of the castle. It was originally built as part of the wider town's defences, and with Alnwick being the epitome of a 'town on the front-line' it was a necessary defensive feature of this much raided English town. Alnwick was the chief seat of the Percy family, who were almost always at odds with their Scottish counter-parts, the Douglases. Indeed, even before the Percys and the Douglases began trading blows, Alnwick had been raided on numerous occasions by Scottish armies. Malcolm III was defeated and killed at Alnwick in 1093, and William the Lion was defeated and captured here in 1174. William Wallace also attacked Alnwick in 1297. In 1428, the Douglases launched an attack on Alnwick, prompting murage to be granted to the town. Walls and gates were therefore constructed from 1434 onwards. 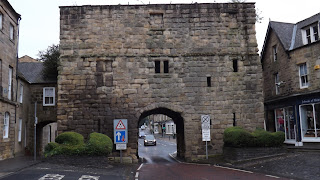 Above. View of the gate from the B6346 , looking East from within the town.
The Hotspur gate was either still being built, or had just been completed in 1448, when another Scottish raid was launched against the town. From 1452 onwards, the sum of £20 a year was made available to maintain and repair the walls and gates.
The Hotspur gate was originally one of four gatehouses built to defend entry into the town. The others, the Clayport Tower, the Pottergate Tower and the Narrowgate Tower have all long since been demolished and have vanished altogether. None of Alnwick's walls have survived either. Hotspur was a nickname given to Sir Henry Percy, occasionally referred to as Harry Hotspur 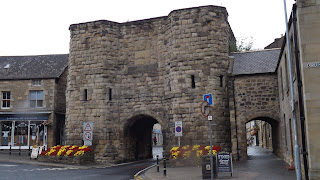 Above. View of the gate from the B6346, looking West from outside the town.

The tower's central passage is around 3.5m wide and retains its porcullis groove within the four-centered arch. The towers, more readily visible from outside the town, are around five meters wide built over wide chamfered bases. Each of the two conjoined towers has its own guard room, accessed from within the passageway with loops facing both into and out of the town. A tiny trace of the nearly two metre thick wall survives on the South Western side of the tower.

Posted by The Cumbrian Castle listing. at 7:31 pm