Situated in the wonderful village of Warkworth within a loop of the river Coquet, the church of St Lawrence, Grade I listed, hints at one of the those rare churches.....a church built for protection or defence. It is however debatable, and the claim of a 'defensive church' rests mainly on the thickness of walls, the relative small size of the original windows, and a local story of an attack by Scottish soldiers led by Duncan, Earl of Fife (Donnchad II) C.J. Brook, in his book Safe Sanctuaries, mentions a chamber above the stone vaulted chancel, but let's not forget that Brook also mentions St James of Burton in Kendal as a fortified church, a building that would not have worked as a place of defence in the slightest! The attack by the Scots is a more interesting story, and follows roughly the same narrative as the story connected with Kendal's Parish church (Kendal, Cumbria) in which forces led by Duncan, Earl of Fife, in 1189, attacked Kendal, setting fire to the church and killing "the inhabitants of Kendal". The attack on Warkworth, is reputed to have taken place on the same day as the Battle of Alnwick, on the 13th of July, 1174, a battle in which William the Lion of Scotland was captured by Ranulf de Glanvill. In Warkworth's story, set some fifteen years before the attack on Kendal, the town's inhabitants sought refuge in the church, but were killed when the building was set alight, along with other buildings in the town, killing around three hundred people. 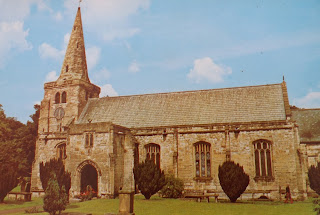 Above. Old post card (from personal collection) showing the church of St Lawrence.

The church we see today, dates from the late 1100s, and replaced an earlier (Saxon) church that stood on the same river side site. The original church, mentioned in writings from 737, most likely succumbed to the Viking raids of 875, when Halfdan Ragnarsson led an army along the River Tyne, destroying and plundering towns and villages along the way. During the 9th and 10th centuries, the church was rebuilt in stone, this early building being discovered during repair works in 2008. 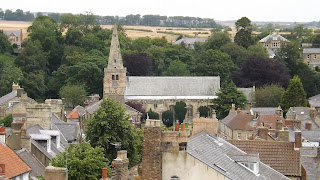 Above. The church as viewed from Warkworth Castle.

In 1120, Henry I gave the church of St Lawrence to Richard de Aurea Valle, along with churches at Corbridge, Whittingham and Rothbury. These churches later became part of the Diocese of Carlisle when it was formed in 1133. 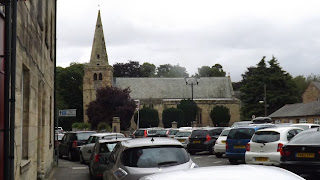 Above. The church viewed from Dial Place.

The tower was built sometime around 1200, with the belfry and spire being added in the 14th century. A South aisle and a traditional porch in the Southern wall were added in the 15th century. 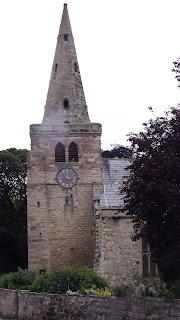 Above. The tower from Dial Place.

Warkworth was reputedly the first market town in England to proclaim The Old Pretender, James Francis Edward Stuart, as the King, during the early days of the 1715 Jacobite rebellion.

Above. Floor plan of the church, showing building periods.

Restoration work in 1860, specifically the building of a new roof, resulted in the loss of the clerestory windows from the South wall, the removal of most of the internal wall plaster, as well as the removal of all of the box pews. Work to stop the subsidence beneath the North wall has to some extent been ongoing since the 13th century. Huge stepped buttresses have been introduced in an attempt to stop the church sliding into the river. The church, the castle and indeed the town, along with its beautiful fortified bridge, are all well worth a visit.
Posted by The Cumbrian Castle listing. at 7:28 pm