Warkworth is a wonderful village roughly a mile North of Amble and four miles South of Alnmouth in Northumberland. The village is built in a loop of the River Coquet, only a short distance from the sea. Along with the bridge, the village has a beautiful castle and a stunning church, said by some historians, to have been built as a place of refuge. Warkworth bridge spans the River Coquet at the Northern end of the village, taking the A1068 North to Alnwick. 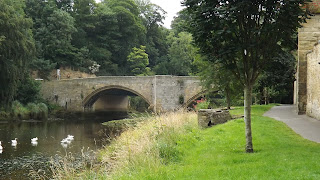 Above. View of the bridge from the riverside to the West.


Warkworth bridge is one of only two bridges that have managed to retain their defensive towers, the other being Monnow Bridge in Monmouth, Wales. The bridge is around eleven feet wide, and hence unsuitable for the amount of traffic passing through modern day Warkworth. A new road bridge has been constructed, bypassing the medieval bridge altogether. It consists of two arches, and has a neat central pair of pedestrian refuges in each wall above the triangular cut-waters. 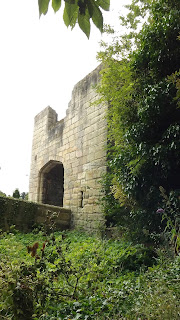 Above. View of the bridge's tower from the riverside.


The tower is situated at the Southern end of the bridge, and is known as Bridge Head Tower. The bridge was built in 1378, and paid for from a bequest made by John Cook of Newcastle, who left 20 Marks towards the construction of a new bridge and its tower. The tower is ruined above the ground floor and roofless, but would have once housed a 'guard room' where a porter would most likely have lived. His responsibility would mainly have been for monitoring traffic coming into and leaving the village....more of a toll house than a pele or solar tower. 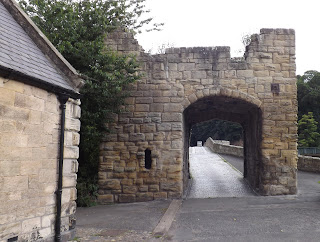 Above. The bridge's tower looking North from Bridge Street.


The tower is roughly eight and a half by five and a half metres, and would have originally stood to two storeys. A newel stair can still be seen giving access to the upper storey. The upper chamber has a fireplace...always a good indication that a building such as this was intended to be occupied, if not full time, then for long periods. 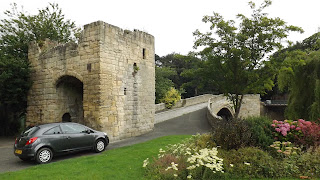 Above. The bridge and its tower from Bridge Street. 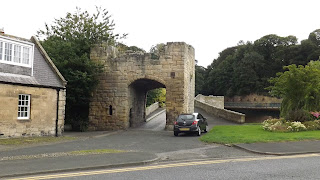 Above. The tower from Bridge Street.

The bridge and the tower are, surprisingly, only Grade II listed, though the whole structure also has Scheduled Ancient Monument status. It's great that the bridge and tower are freely accessible and not blocked off and locked up.

Posted by The Cumbrian Castle listing. at 7:26 pm