No castle, but just a field with a few lumps and bumps....but as with many of these sites, looks can be very deceiving. The small village of Widdrington lies South of Warkworth and a mile or so inland from Druridge Bay in Northumberland. This is a very difficult site to find, most notably because there simply isn't much to see any more. The best views are to be found to the East of the farm buildings, from the B road that runs along the coast at Druridge Bay and takes a sharp Westwards turn inland. From here the slight earthworks can be seen in the field to the South of the farm buildings. Alternatively, the site can be viewed from the churchyard of nearby Widdrington Parish Church to the West of the site. 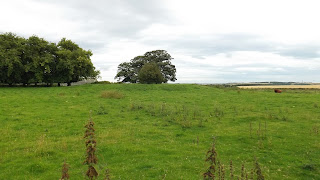 Above. View of the castle site from the church yard to the West. 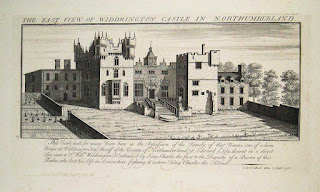 Above. Buck brother's illustration of the castle before demolition.
Gerard's castle was later rebuilt in the early 17 century as a manor house of substantial importance. It was furnished with a large square tower with bartizans as shown in the image above. By 1643, with William Widdrington marrying the heiress of Blankney Hall in Lincolnshire, Widdrington castle ceased to become the main residence for the family. After his support for the Jacobite cause in 1715, his lands and property were taken by the Crown in punishment, and by 1720 the castle was little more than a ruin. An attempt was made to repair and rebuild the property in 1772, but a fire gutted the building, halting the work. A second attempt at rebuilding was made, and the house was lived in for a short while. The building remained uninhabited from 1802, and in 1862 was demolished leaving only the tower standing. By 1903, the last standing portion of the tower was also removed, leaving only the slight mound in the middle of the field.
Posted by The Cumbrian Castle listing. at 7:12 pm