The very picturesque castle at Stokesay lays in the village of Craven Arms, on the A49 11 miles to the North of Ludlow, and about 15 miles South of Church Stretton in Shropshire. The castle consists of a large tower at the North of the site, with a projecting central section and timber built gallery, a large banqueting hall built along the Western side of the castle's wall, a Tower built at the Southern end of the West wall, an open courtyard, a now dry moat and a fine, well preserved gatehouse, timber built and not of any great defensive qualities. 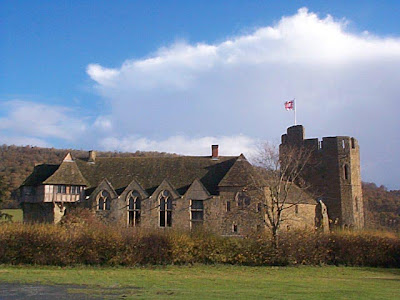 The above photo, shows the Great Hall\banqueting hall from outside the castle's walls. The hall is around fifty feet long, and sits between the castle's two towers. The hall possesses an unusual open fire hearth in the centre of the huge room, instead of the normal fire place in the wall. It seems that there was never a vent in the castle's roof for the smoke to disperse through...the blackened roof timbers bear witness to this. A small part of the hall, at the South end, by Lawrence de Ludlow, as a private 'withdrawing chamber' with squints in the walls through which he could spy on his guests. 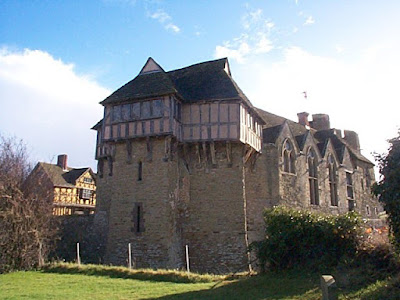 The photo above, shows the North tower with it's well preserved timber gallery. The tower possibly dates from the 1140's, making it most likely the oldest structure surviving today. The five sided tower overlooks the yard of the church of St John the Baptist...the moat can just be seen, laying beyond the fence posts. These days the moat has been infilled, and serves as a walk around the outside of the castle walls. 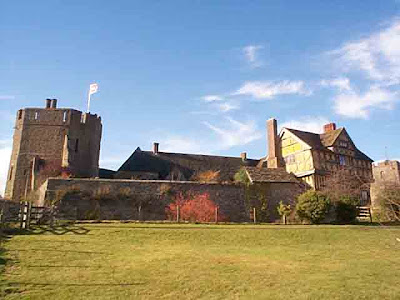 The photo above, shows the castle viewed from the East. The South tower can be seen to the left of the photo, and the gatehouse can be seen in the foreground to the right. The North tower can just be seen to the right of the gate house. The South tower, probably dating from 1291, was built by Lawrence de Ludlow, and was erected after he gained a license to crenellate on October the 19th, 1291. The exact wording of the licence is: "to strengthen with a wall of lime and stone, and crenellate his mansion [mansum] at Stoke-say". (thanks to Philip Davis) The tower represents the heaviest defences here at Stokesay, with its thick walls and multi faceted exterior....affording the occupiers of the castle good views to the South West, the South and the South East. The curtain wall was built as a result of the license, but only one portion still stands to the original height, between the South tower and the Great Hall. The rest of the wall has been much reduced in height, and now resembles a simple field wall. 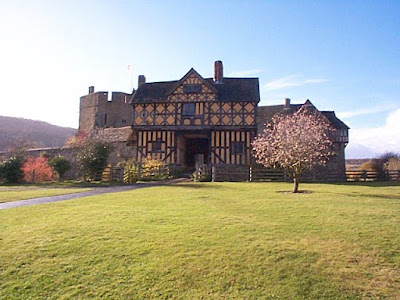 The gatehouse, along with the jettied portion of the North Tower, is one of the most recognisable features of Stokesay Castle, with its yellow plaster work and dark timbers. As far as defensible\impregnable gatehouses go, this 16th century building would not stand up to any form of attack....so it's most likely that it was built as a status symbol\prestige building by the then owners, the Baldwyn family. It's thought that this building replaced an earlier, possibly more defensive gatehouse. The Baldwyn's were in possession of Stokesay castle during the Civil war, and in 1645, when nearby Shrewsbury fell to Cromwell's Parliamentarian forces, the defenders at Stokesay didn't take long to decide to surrender to his forces after a very short siege. The order was given for the castle to be slighted...but the orders were only carried out on the curtain wall, which was reduced in height two years later. The castle remained inhabited for the rest of the 1600's, until it was finally deserted in around 1706. It was used by local farmers for storing grain for the next 150 years or so.
Sometime in the early 19th century, the 13th century buildings were recognised for their architectural and historical importance. The castle was purchased by John Darby Allcroft in 1869, and he immediately set about restoring the buildings. The castle was opened to the public by the Allcroft family in 1908, and ran it as a tourist attraction until 1992 when it passed into the care of English Heritage, who run the castle now.

The following link takes you to some fantastic photos of the castle.
Castle Wales Web Site


The following link takes you to an excellent plan of the castle.
Wikipedia plan

I found Stokesay by accident when I was driving past on a wander through south-west England & Wales in 1997. It was a great example of transformation of a Norman keep into a fortified manor.

It and Tretower Castle, in Powys, are two of the best examples I found of complete medieval halls accessible to the public. I went in October and had them to myself so I could wander and dream.

At Tretower they still have sliding wooden shutters in the windows. It was so quiet that a pair of robins were having a territorial dispute in the great hall. It's round keep and bailey is separate from the fortified manor. Highly recommended!