This very well hidden tower house sits at the head of Loch Beag, about five miles East of the Northern tip of the isle of Jura. Built on private land, and hidden from prying eyes by a screen of trees from the loch, it would appear that this is a very difficult tower to photograph properly. 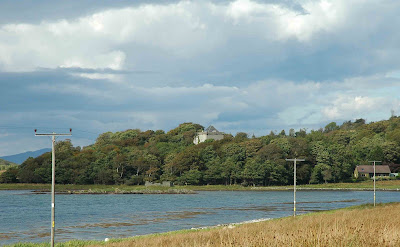 Craignish Castle was originally the home of the Campbell's of Craignish, and for many years was also the home to the Lairds of Craignish. Dugall Maul Campbell, was the first Laird, and it was his descendants that built the castle here. During the early 1500's, the castle was in the hands of Ranald MacCallum....the hereditary keeper of the castle. The site is thought to have been home to a castle from as early as the 12th century, but the castle seen here today probably only dates from sometime during the 16th century. It started out as a simple keep, measuring some 50 by 32 feet over walls nearly seven and a half feet thick. The tower has since been absorbed into a modern mansion house, built sometime around 1832. It is built on a rocky outcrop, possesses a vaulted ground floor and has a dungeon, hewn from the bedrock beneath it.  This link shows a great photo of the mansion with the tower house built into it. These days, the closest you can get to see the castle, seems to be from the waters of the loch.

Posted by The Cumbrian Castle listing. at 5:17 pm