I've at last managed to bag some photos of the last parts of Chester's fortifications that I wasn't able to photograph on my visit to Chester in 2008. These last three sets of photos are of the Agricola Tower at Chester Castle, shown below, the Cathedral gatehouse and the Bridge Gate. The Agricola Tower lays at the Eastern side of the castle. The inner ward, to the South East and West of the tower is still walled, but these walls were mostly rebuilt and\or refaced during the 18th and 19th centuries. There were originally three towers built within the inner ward, overlooking the wall...but these have long since been demolished. These three square towers would have been accompanied by a round bastion and a twin towered gatehouse. The Agricola tower is the sole surviving tower here, measuring some nine metres square and three storeys tall. 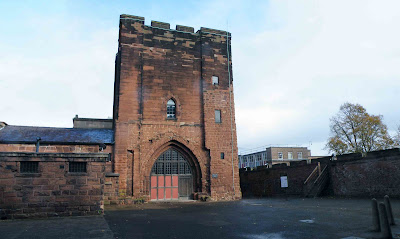 It is thought that the huge archway in the South West face of the tower, shown above, was once either the inner arch of a former gatehouse, or the chancel arch of a chapel. The chapel would have been housed within the tower, whilst the nave would have possibly been a timber framed building, extending to the South West. The tower may have been built sometime during the 12th century, judging by the 'clasping' buttresses, but on the whole the tower has a 13th or 14th century look about it. The tower contains a rib vaulted floor to the first floor, probably inserted after a fire in 1302 seriously damaged the building. The southern buttress contains a spiral staircase providing access to the other floors within the tower. The middle storey contains the chapel of St Mary de Castro with an altar recess built into the North East wall. The halls and chambers shown on early maps and plans of the Inner ward have all been demolished and replaced with other buildings. Wall paintings were discovered in the chapel, possibly dating from the 1220's, when the white washed walls were 're-decorated' in the 1980s....demonstrating the age of the tower. 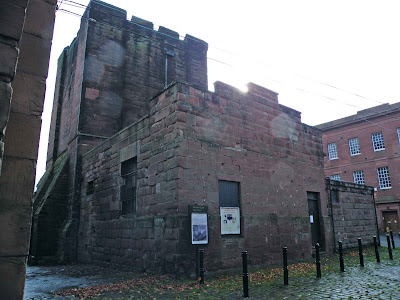 These days, the tower appears to be out of bounds. One of the gentlemen manning the gates told me that the inner ward area of the castle had become a haunt for local drug users and homeless people, and was therefore kept locked and inaccessible. He was kind enough to give me five minutes to take some photos to add the collection though. The tower is only just visible from the river side, and only if the trees are not in full leaf....from other angles it is all but invisible...so these are welcome additions to the Chester collection.
Posted by The Cumbrian Castle listing. at 4:26 pm