I forgot that I had photos of the gatehouse at Caerlaverock castle....so here they are. The remains of the North East entrance fortification can be found at the head of a rectangular courtyard, surrounded by the remains of ditches and banks...now much worn. The photo below, appears to show machicolations at the top of the gatehouse, although it's likely that the remains only represent a tiny portion of the original building. 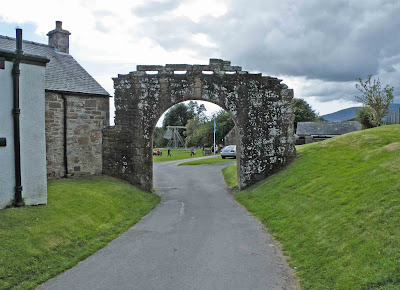 The walls are probably around four foot thick, and as shown in the photo below, contain two large draw bar tunnels. I wonder if there would have been a smaller door, set within the main door....if you look at the top larger draw bar tunnel....there is a smaller one, possibly for allowing visitors on foot, entrance to the courtyard. A single hinge now survives, still embedded within the stone work. 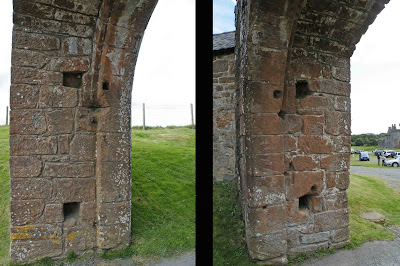 Any sources I checked when researching these remains, neglected to date the gatehouse....though when I visited back in August, the greeter at the castle stated that he thought the gatehouse probably dates from the 17th century. 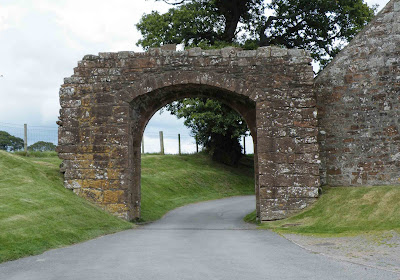 Excavations in 2000, uncovered the footings of a large number of buildings with cobbled pathways between them. The lack of any roof tiles or roof materials, seems to suggest that these cobbled enclosures may have been for safe-guarding life stock. The bank was found to have red sandstone footings on its top surface, indicating that it would one have been substantially higher than it is today. The gatehouse doesn't get much attention from visitors, and it's fairly difficult to find any information regarding its builder or any information that would enable me to date it.
Posted by The Cumbrian Castle listing. at 1:24 pm