The last of the gates at Chester that was missing from my collection, Bridgegate, is situated at the Southern end of the city, at the end of Lower Bridge Street. The road here leads straight onto the old medieval Handbridge over the River Dee. Designed by Joseph Turner, and opened in 1782, the Bridgegate replaced a long line of gatehouses and buildings on this site. 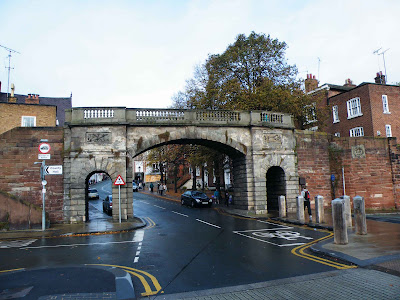 It is thought that the original, defensive gatehouse on or very near to this site, was already in existence by the 1120's, as the post of Office Sergeant was recorded at this time. It was, at this time, known as the Welshgate, as all traffic from Wales had to pass through this gate to enter the city. The gatehouse, in whatever form it took, was replaced or rebuilt in the 14th century, at the same time that the bridge was rebuilt, to enable traders to enter the city. By the end of the 15th century, the gate consisted of a single Gothic arch with a tower at each side. In 1600, a square tower was added, called John Tyrer's Water Tower, which housed machinery for taking water from the River Dee and lifting it into the city. This building was destroyed when Parliamentarian forces laid siege to the city. The present gate way, is similar to the other 18th and 19th century gates into the city of Chester.
Posted by The Cumbrian Castle listing. at 5:20 pm