Lawkland Hall was a revelation...I had no idea such a huge and beautiful country house was hidden away so close to Settle. This is a Grade I listed building, and although the photos here don't really do it justice, the grading is well deserved. Lawkland is a loose collection of houses and farms situated on Graystonber Lane....an old road that pre-dates the A65, running from the South of Austwick into Giggleswick some eight miles to the South East. The hall possesses huge ornamental gardens, set about the grounds to the rear (South) of the property. 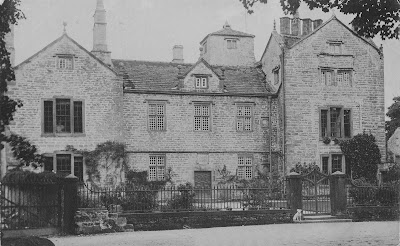 Above. Detail of an old postcard showing the front facade of the hall close up.
The above photo shows a view of the hall from the road, looking directly South. There is a central hall block, with two towers either side. The left one can be seen in this photo, and the right hand one can be seen in the last photo on this posting. The tower shown above, and the central hall block, are thought to date from the late 16th or early 17th century, indeed there is a date stone in the hall showing a date of 1679. Check the link out for a photo.

The hall and the early tower, were built by Peter York of Middlesmoor. He was the Governor of Lieth in Scotland during the reign of Edward VI (reigned 1547 to 1553) Peter York married the daughter of Sir William Ingleby of Ripley Castle....and the manor of Lawkland and its associated lands were eventually sold to John Ingleby of Ripley. This is thought to have taken place some time around 1572, at which time it is thought there was probably a hall house of some description here at Lawkland. Whether there was a defensive tower on the site isn't known. The Ingleby family gradually began to buy up land and properties in the surrounding villages, adding land in Clapham to their property portfolio, including the manor house at Clapdale, described as "a great old castle joyning on Clapham ". This building....castle or not....features heavily in local history and legend. The Ingleby family are also connected with Austwick Hall, reputedly using this property as the manorial centre for Austwick and the surrounding farm lands. The Ingleby family were of the Catholic faith and so kept a low profile...possibly the reason that there is so little information regarding the family. The hall at Lawkland is alleged to have a priest hole, hidden within the line of chimneys visible on the last photo of this post. By the mid 1600's, the Ingleby family were spread across three manor houses....at Austwick, at Lawkland and at Clapdale Castle. Some research needs to be done on where Clapdale Castle was....and if there are any remains left.

The hall at Lawkland was rebuilt in 1679....the works being described as a "thorough rebuilding" so it's safe to assume that many changes were wrought on the fabric of the hall. At this time, continuing through the 1700's, the hall became the centre for Catholic worship, providing a safe haven for 'Papist's' especially with the construction of a second floor chapel. The Inglebys continued to own the hall right throughout the 1700's, rebuilding and adding onto the hall and providing us with the 'mish-mash' of building stlyes that we see today. In 1846, the Ingleby family relinquished their hold over Lawkland Hall, with the death of Margaret Ingleby. The Fosters occupied the hall from this point on, until it passed to the Watkins, possibly after the death of John William Foster. In 1914, the hall passed into the hands of John Ambler, a cloth manufacturer from Bradford. In 1937, the Amblers rented the hall to James Southworth who bought the hall and the surrounding lands in 1939 for £8500. His money brought him Lawkland Hall, Lawkland Hall Farm (a few hundred yards up the road)and Lawkland Green which consisted of 225 acres. By the 1950's the hall had once again been sold, this time to the Bowring family, who still reside at the hall. 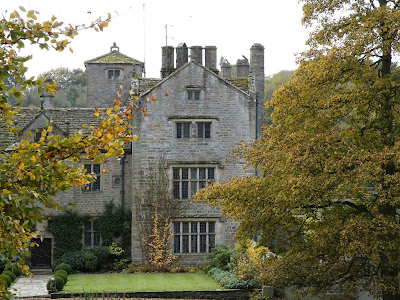 Whether the hall contains the remains of some sort of light fortification, or is built on the site of an earlier fortified building is extremely difficult to tell....the building is of so many different periods, each with their own characteristics that it is almost impossible to pick through the melee of towers and wings. If any further information comes to light regarding Lawkland Hall's possible fortified history, it will be posted here.
Images of England details.

I was a child living in Giggleswick in the 1940's. I used to play at Lawkland Hall when it was owned by Mr James Southworth. He had a daughter of my age who was at my first school. I remember very clearly being shown the Priest's Hole and we were told that under no circumstances were we ever to go into it because it was very dangerous. My memory is that they lifted part of some wooden flooring to show us the 'Hole'.

My wife lived in Austwick around 1970 and was taken to the hall by Revd Gill of Austwick Church. She was shown the priests hole after moving some wood to reveal it. She, among with other members of the church choir, were also invited to use the halls outdoor swimming pool. Looking at Google earth now there does not appear to be one nowadays.