Just off the A6, and a mile to the South of Milnthorpe, the remains of a building platform, sometimes identified as a motte and bailey, can be found in the deer park of Dallam Tower. The remains sit at the highest point overlooking Milnthorpe to the North, Dallam Tower to the West, and Beetham to the South. 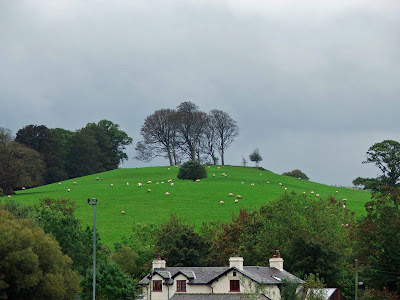 The remains consist of a severely damaged platform, with an earth and stone bank around the East, South and West edges, a scarped summit and the slight remains of a ditch to the South. It's thought that the motte was built sometime between 1066 and 1299.
The earthworks were levelled in the 18th century, and much of the top of the site was removed. It was during this work that fragments of stone masonry were found, along with human bones, metal and building foundations. 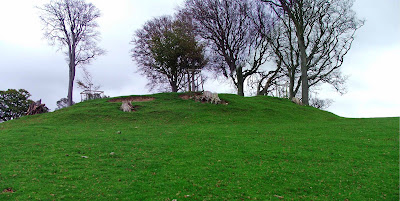 The site has been variously described as a medieval motte and bailey castle, medieval building platform, medieval ringwork (a precursor to a motte and bailey castle) and a fortress dating from anywhere between the 5th and 11th centuries. Whatever its archaeological worth, the site is well defined and stands sandwiched between the site of the original pele tower that Dallam Tower replaced, and Beetham Hall. Mentioned in The history and antiquities of the counties of Westmorland and Cumberland (1777) by Burn and Nicholson, the site is described "A little Eastward from the hall, is a small hill, on top of which formerly was a castle of a circular form; and the hill is yet called Castle Hill, and the side thereof, Castle Bank." 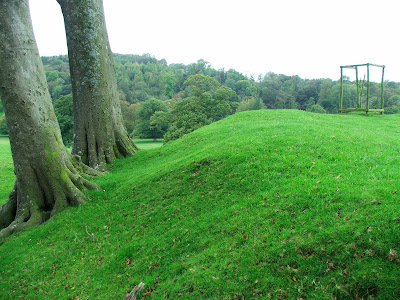 The footpath that runs through the deer park takes you right past the earthworks, although a deviation of a few hundred yards is required to explore the summit. It's well worth it with the views out towards Arnside and Sandside to the North, Dallam Tower below to the West, and the herds of deer all around the park.
Posted by The Cumbrian Castle listing. at 6:22 pm