Levens Brow
Levens
Cumbria
Travelling West on the A590, and taking the turning to Levens onto the A6, will take you right past the intriguing earthworks at Levens Brow.

The remains of this site lay on the left hand side of the road, at the peak of a small hill now crowned with a single hawthorne tree.

There has been some confusion in the past as to whether or not the earthworks were of any archeological value, with some commentators saying that they were nothing more than the remains of recent gravel quarry. However, human remains have been found in the area, along with lithic scatter, the remains of worked flints for example, and it's now thought likely that the site's builders merely took advantage of a naturally occuring glacial deposit mound. 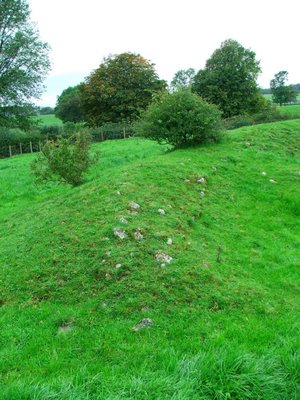 The site is a nicely formed scooped enclosure, comprising of an earthen bank which runs nearly the full circumference of the top of the mound and stands to a height of around a foot in places, and the remains of a possible ditch to the East of the earthworks. There's no doubt that the site has been damaged by recent attention, specifically in its use as a deposit for household waste!
A nearby glacial morain was found to contain a human burial, and field walks done in nearby fields, turned up axe heads and other flint tools. It's therefore quite likely that the whole area, extending right down the lands now occupied by Levens Hall, were active well before the medieval hall was built.
It is nearly impossible to gain access to this site, due to the lack of gates on the East side of the road, and the high hedges growing on high field banks. A little scrambling is therefore required to access this area.......but don't get caught!
Posted by The Cumbrian Castle listing. at 5:59 pm