Caerlaverock is one of those great sites that not only offers you a beautiful medieval castle, in the most dramatic settings you could imagine, but also springs a surprise on you….a second castle, hidden a few hundred yards away, whose remains represent the original fortress built here.

The old castle can be found to the South East of its larger cousin, hidden in the wooded walks that lay behind the main castle. The remains have been excavated, consolidated and labelled so it is easy to see what you’re looking at.

It is thought that this castle was built some time between around 1225 and 1250, by John Maxwell, and consists of several periods of building, ending with its abandonment in (probably) the late 1250’s. The castle’s footprint is somewhat irregular, with four corner towers which would originally have measured around six metres square, a ‘lozenge’ shaped courtyard measuring some twenty five metres by twenty five metres, a large hall in the west end of the courtyard and a gatehouse facing North. 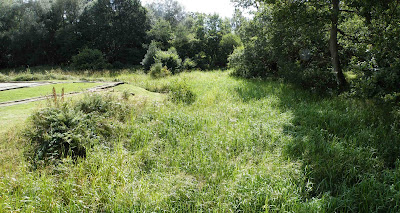 The footings, excavated and consolidated stand at ground level, and it’s almost like walking around a diagram, a floor plan of a building. The wooden footbridge passes over the single but wide ditch, slightly to the left of the footings of the gatehouse. The site of the walls and the towers are plain to see, as are the hall and a range of buildings set against the Southern part of the castle’s wall.

Before the castle was excavated (in 1998) all that could be seen of the remains, was a grassy knoll lying in the center of a well defined moat. Over time, as the top soil was removed, the castle's curtain wall, inner buildings and corner towers were gradually uncovered, as well as a small harbour to the South West closer to the Solway Firth.

I can’t find much more information on this castle, the reasons it was abandoned for example…but as I find more information, I’ll include it here.
Posted by The Cumbrian Castle listing. at 6:18 pm