Stirling Castle is really one of those magnificent sites that demands two write ups: a historical over view, and a site over view. I'll start with a historical over view, detailing the castle's many building phases and surviving (and missing) structure later on in the blog!
To start with, the location of this castle is perfect...for both defence, and for the choosy castle hunter looking for a great site to photograph. The River Forth and the River Teith merge just to the West of Stirling. The River Forth then snakes its way from West to East, meandering along the bottom of the valley. The river in its self has always been a barrier across which anyone needing or wanting to travel into Northern Scotland has had to cross. As well as the river, to the North and North East, the Ochil Hills rise to a height of 721 metres (Ben Cleuch) providing an almost impenetrable barrier.....whilst to the South and South West, the Touch Hills rise to an equally impressive 521 metres (Miekle Bin) In effect, these two ranges of mountains, with the valley and its ever present castle beneath them, have almost cut Scotland in half, both geographically and politically for as long as Scotland has been a kingdom.

It is surmised that the huge volcanic outcrop upon which Stirling castle is built, would, at one time, have been occupied by the Romans, the Votodani or the Picts, purely on the basis that this piece of high ground over looking the river, would have been of valuable military importance to any one needing to occupy this part of Scotland. There is evidence for a small fort on a rocky outcrop to the North East of the castle, on a hall called Gowan Hill. No evidence has been found of early occupation on the site of Stirling Castle though....perhaps the building of the castle in the early 1100's obliterated any signs of early occupation. The first record of a building of any sorts here, dates from 1110, when King Alexander I built a chapel in Stirling, probably on the castle's mount. With the death of Alexander in 1124, and the succession of King David I Stirling found itself as a Royal Burgh. The castle became the centre of local administration, probably extending its administrative and military control over the whole of the kingdom, until it was forfeited by King William I, under terms of the Treaty of Falaise, the English King, Henry II. It is thought that the castle was not garrisoned by English soldiers during this period, and it was returned back into Scottish hands when Richard I (Richard the Lionheart) effective 'sold' the South of Scotland back to the Scots to raise money for a Crusade to the Holy Lands. 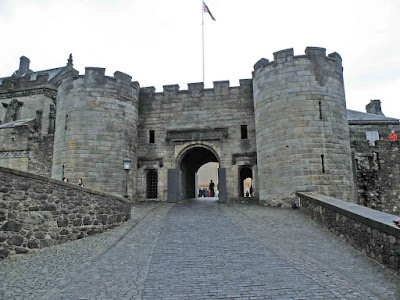 Stirling and its castle were favoured by Alexander III up until his death in 1286. The period of his reign is widely regarded as a golden era for Scotland, figuring heavily in European arts and politics, and becoming a strong independent kingdom. When he died however, there were no immediate heirs, and with the assistance of England's Edward I, the country was plunged into a succession crisis. Edward used this period of unrest to fuel divisions within Scotland, arbitrating between the rival factions with the sole aim of installing a 'puppet' king on the throne of Scotland. Edward demanded that all Scottish castles be placed under English control, including the Royal castle of Stirling....and with this in mind, he came North to take over Stirling in 1291. Edward judged that John Balliol had the strongest claim to the Scottish throne, and he was crowned at Scone on the 30th of November 1292. It appears that Edward's idea of a 'puppet' king backfired, as King John eventually chose to stand against Edward, effectively kick starting the 60 years Scottish Wars of Independence. In 1296, recognising both the military and symbolic importance of Stirling and its castle, Edward invaded Scotland. He found the castle empty and abandoned and immediately set about occupying it. In 1297 however, the thorn in Edward's side, William Wallace and an accomplice, Sir Andrew Murray defeated the English garrison at the battle of Stirling Bridge. It is thought that William and Andrew meted out a devastating defeat to the 9000 to 12000 strong English army, with as little as 2500 men....bottle necking the English army as it attempted to cross Stirling Bridge and slaughtering all who attempted to cross. The rest of the English garrison retired to the castle, where they were besieged for a short while before surrendering. The castle only remained under Scottish control for about a year. It was abandoned by the Scots after they were defeated by the English at the battle of Falkirk in July 1298. Edward, in turn, only held the castle for a year, when it was besieged by Robert the Bruce in 1299. The garrison did not receive promised reinforcements and were forced to surrender to the Scottish forces.

In 1303, the English invasion and occupation of Scotland were gaining momentum, and with Stirling castle the only Scottish castle still occupied by Scottish forces, Edward laid siege to it....this time employing a new siege weapon, the Warwolf, a huge trebuchet that could be used to demolish castle walls. The very sight of the Warwolf is said to have intimidated the Scottish garrison into surrendering before it had even been used. The English ordered part of the Scottish garrison back into Stirling castle so that Edward could see his new weapon used in anger. (A scale mock up of the Warwolf can be seen at Caerlaverlock Castle) It is thought that the gatehouse was destroyed as a result of this onslaught.
Four years later, Edward I was dead, and it seemed that the English occupation of Scotland was beginning to crumble. Robert the Bruce was now Robert I of Scotland, and Edward's successor, his fourth son Edward (II) lacked the motivation and ability to maintain English rule in Scotland, especially against an ever strengthening Scottish uprising. By 1313, only three Scottish castles were still being held by the English. Stirling was one of these castles, and it was besieged by King Robert's brother Edward Bruce. Realising the severity of the situation, the garrison's commander, Sir Philip Mowbray agreed that if he did not receive English reinforcements by the 24th of June 1314, he would surrender the castle to the Scots. Edward Bruce agreed to these terms and withdrew the seige. Edward II set out with an army of around 25000 men, with the intention of relieving the garrison in Stirling castle. On the 23rd of June, he was met by Edward's army (totalling some 9000 men) at Bannockburn to the South East of the castle. Over the course of the 23rd and the 24th of June, the Scots systematically slaughtered the English army, causing the death of an estimated 11000 English soldiers, and causing Edward II to seek refuge in Stirling castle. However, Sir Philip Mowbray decided that he had to keep to the terms of his agreement with Edward Bruce, and he duly left the castle to the Scots, forcing Edward and his surviving soldiers to flee. Edward and his personal bodyguard left and made their way to Dunbar Castle in East Lothian, where he then sailed back to the safety of England. Those English soldiers that tried to make their way back South to England on foot, were harried and chased down by the Scots, and slaughtered in their hundreds. Not only was Bannockburn a decisive defeat for the English, but it was relatively bad news for Stirling Castle. King Robert ordered that the castle be slighted....to prevent it being used by the English again should they make moves North again. 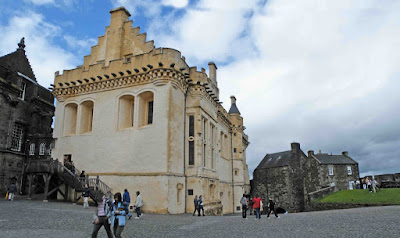 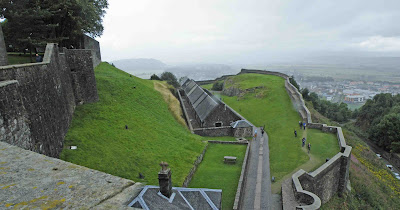 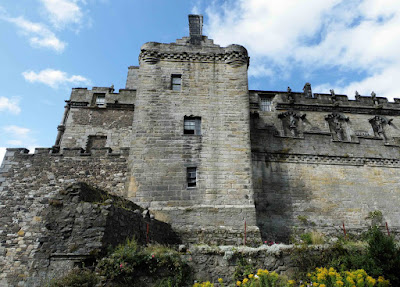 Posted by The Cumbrian Castle listing. at 12:11 am