Built between 1569 and 1572, Mars Wark is an enigmatic ruin that stands at the head of Castle Wynd with its back facing into the grave yard of the Holy Rude. I've included this building on the blog for one specific reason. All along the facade are a number of gun loops....I counted about four in total....one in each wing, and one in each of the octagonal towers flanking the arched doorway. Just as MacClellan's Castle in Kirkcudbright, which also sports a large number of gun loops, demonstrates the transition from fortified residence to more comfortable 'peace time' high status manse, it is likely that Mars Wark also demonstrates the inclusion of gun loops for show, rather than for defence. 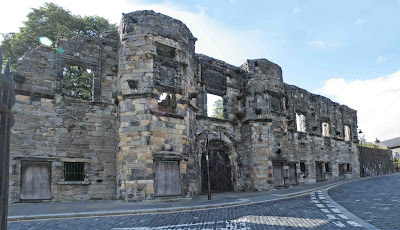 The remains suggest a large two storey building, though it is likely that it was originally three storeys tall....the top storey possibly being removed to enable the ongoing preservation of the ruins. It was built by John Erskine, 1st Earl of Mar. John was the hereditary keeper of Stirling Castle and became Scottish Regent in 1571. It's likely that much of the stone used to build the mansion here, came from Cambuskenneth Abbey. Mars Wark was also home to the 6th Earl of Mar, another John, who led the 1715 Jacobite rebellion. When this rebellion failed, the building was commandeered and turned into barracks. During the second Jacobite rebellion (1745/46) the building was badly damaged by canon fire, gradually falling into ruin from then on.
The ruins can be seen at the top of Castle Wynd, and also from the grave yard of the Holy Rude.
Posted by The Cumbrian Castle listing. at 7:58 pm