On the South banks of a bend in the River Eden in the Mallerstang valley, there are possibly 4 Bronze age cairns....two visible, one possibly damaged at the river side, and another unidentified as yet. 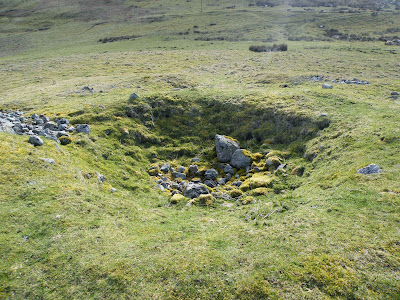 The largest of the two found recently on my visit to Lammerside Tower, is shown above, with collapsed interior and an exposed rim of river washed stones. The centre measures about 15 feet across, and is around 5 feet deep. The rubble at the centre is moss and grass covered, suggesting that its collapse was some time ago. It could of course have been robbed out, causing the damage seen today.

The above photo shows the small peninsula that the two cairns can be found on. The largest of the two cairns seen on this visit is on the mound of earth in the centre of the photo. The second, is to the right of the larger cairn, still covered in turf. 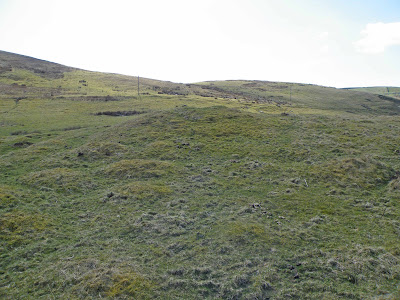 This photo (above) shows the second of the two surviving cairns. It is only distinguishable from one angle...viewed from other angles it's almost impossible to make the cairn out from the surrounding landscape.

The photo above, and below, show panoramic shots of the best of the two cairns. The collapsed centre can clearly be seen, along with the rubble rim, surrounding the centre of the cairn. The stones used to make up the rim are all smooth river washed pebbles, probably collected from the nearby river.

Cairns would most likely have contained a human burial, with huge amounts of stone piled upon the body, and sometimes turf being used to cover the stones. Over time, these burial mounds blend in with the surrounding countryside and are sometimes now difficult to find. These two cairns are right on the footpath and so very easy to explore.
Posted by The Cumbrian Castle listing. at 8:35 pm

First time I have visited your site. A fantastic blog. I have just been writing an article relating to Mallerstang and the surrounding areas.