It will probably come as a great surprise to many, to know that rabbits were not always native to the UK, but originally came from the warmer climes of Southern Europe. Rabbits were introduced to the UK by the Normans, sometime after 1066, and were 'farmed' for their fur and meat. Originally they were not at home in England's climate, and had to be well managed...fed, protected from predators and sheltered from the adverse weather. To enable the small collections of rabbits to survive, artificial warrens were built by wealthy land owners. These artificial warrens are today known as 'Pillow Mounds' and can be found all over the UK. In the past they were sometimes mis-identified as burial mounds, and the three in Mallerstang have, for many years, been known as the Giant's Graves. 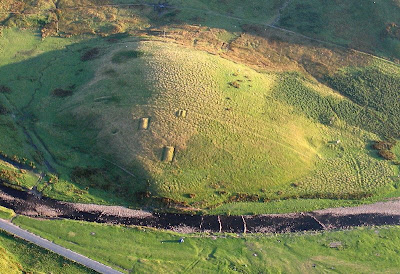 The photo above (courtesy of Simon Ledingham) shows the position of the pillow mounds in relation to the road (bottom left hand corner) the three pillow mounds shown below, can clearly be seen in this photo, with a possible fourth one on the left hand side of the hill side. At the bottom right hand side of the hill, the remains of an enclosure can just be made out, with a track running through it. This could be related to the management of these warrens.

A pillow mound typically consists of a low flat topped mound of earth, surrounded by a ditch (as illustrated here) Sometimes a run of tunnels would be constructed for the rabbits, and then earth would be thrown over these runs, creating the artificial warren. Usually, as at Mallerstang, a ditch would be dug around the warren, and if possible, filled with water. A pale, or fence, would most likely be erected around the lip of the ditch to keep out predators. On Dartmoor, where there are a large number artificial warrens, they are called buries, but elsewhere they are known as coney garths, conegars or conygrees....many villages will have streets or places bearing these names, perhaps harking back to when there were artificial warrens in the area. There is a Conybeds in Kendal, destroyed in 1815, once thought to have been a motte of some sort, but probably an artificial rabbit warren. Cornelius Nicholson, in his 1861 book, The Annals of Kendal, thought these earthworks were an 'exploratory camp'...probably Roman! 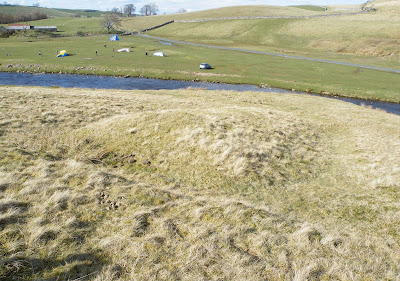 The pillow mounds in the Mallerstang area can be seen on the North facing lower slopes of Birkett Common as you travel along the B6259 between Nateby and Pendragon Castle. They appear as long narrow rectangular shapes cut into the hillside. There are three pillow mounds here, possibly more...but the three that can be seen are the best preserved. One of the mounds appears to have been excavated at some time as it has a shallow trench through its centre. The other two are very well preserved, standing to around two feet tall, and with well defined ditches around them. Each of these pillow mounds are about 20 feet wide, and about 50 feet in length. 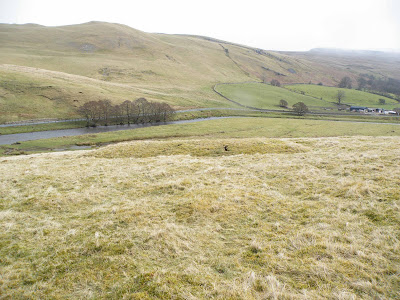 It's thought that these particular rabbit warrens belonged to the Cliffords of Pendragon castle, about a mile and a half south. It's possible that they were placed here, visible on the side of the common, so that visitors on their way to Pendragon castle could see them from the road. Rabbit was a high status food stock, and anyone with the wealth to import rabbits, farm them and manage the warrens would be able to entertain guests to the highest standards. 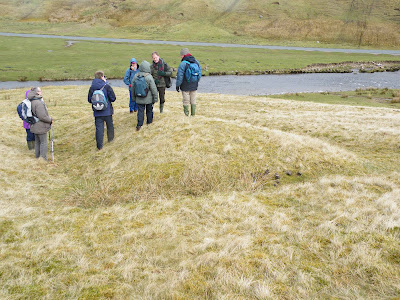 In order for a land owner to be able to farm his rabbits, a licence was required from the King...providing the land owner with the 'Right of free warren'. Rabbits were hunted like many other animals, but rabbits were the only animals women could hunt....they were excluded from hunting boar or deer.
These pillow mounds can be seen from the road across the river, or can be inspected up close by following the footpath past Lammerside castle.
Posted by The Cumbrian Castle listing. at 9:33 pm

I am grateful for the info on the Pillow Mounds. I am planning a short Dartmoor tour of the "ancient and unusual" and came across the name on the O S map and wondered....So thanks for the explaination