Lammerside Tower and its security

It’s looking increasingly likely that Lammerside Tower is in fact the upstanding remains of a gatehouse, and not a pele tower or castle. Despite mentions in numerous books on the subject and a number of writers perpetuating the myth of this building's defensive purpose, these remains could just be one of the attendant buildings of Lammerside….a seemingly complex manorial range of buildings, including stables, a hall (possibly lightly fortified), outbuildings, accommodation for servants and workers, a narrow tower house (built behind the surviving ruins) and an encircling barmkyn or simple curtain wall. 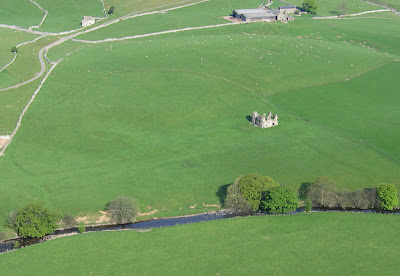 The above photo (courtesy of Simon Ledingham) shows the earthwork remains of the barmkyn encircling the manorial site, with other earthworks indicating the sites of buildings and landscaping features.
Indeed the whole complex would have been surrounded by this wall, to what height or thickness we don’t know…it could have been a curtain wall, or simply a field wall marking the boundary. The photo below, shows the earthwork remains of the barmkyn as it snakes over the brow of the hill. It would have continued turning right, out of site of this position, and round the back of the tower's remains, and then joined this portion of the remains from the right. 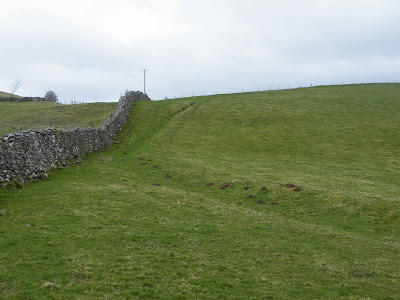 Click on the photo below for a brief explanation of the layout of the Southern end of the complex, including the path of the barmkyn, and the site of the original hall....the manorial accommodation for the Warcop family. 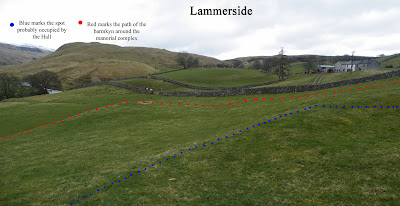 The following photo shows the footings of the barmkyn as it passes over the top of the hill to the West of the tower's remains. I'm reliably informed that there are masonry remains beneath the grassed bank that we can see today...indicating a wall of some sort once stood here, indeed, at certain points along the course of the earthworks, and where rabbits and hares have been excavating, rubble has been exposed in a few places. 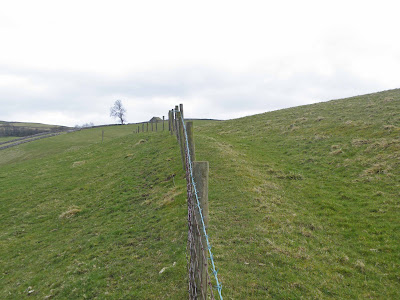 Above. The compound boundary can still be seen today, with a modern fence on top.
The following photo shows the draw bar slot in the door of the South facing wall. The reason the draw bar slot looks as if it is only a few inches above the ground...is that it is. There is so much rubble here, that the ground has been raised about a foot and a half. 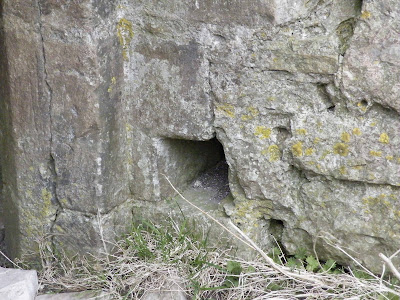 The intriguing thing about this draw bar slot, is that it appears to be on the wrong side of the door. It is actually on the outside wall of the tower....which means that if it was used, it would secure anyone stood this side of the door against anyone already in the tower? Confusing. This could re-enforce the view that the tower is in fact a gatehouse, in which case the draw bar slot would be just another level of security against anyone getting past the security of the gatehouse if they'd already managed to break in. Or...it could simply mean that the door had been moved from its original location, and re-inserted into this wall. Another explanation, could be that the substantial rectangular earthworks that lay behind the ruins, could represent the site of a tower of some sort....so that the door, with its draw bar tunnel, may have been put in place to secure the gatehouse entrance to the tower. 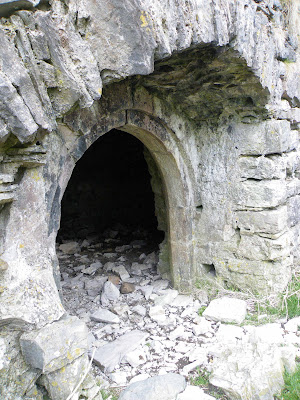 As more information about this building becomes available, it will be posted here.
Posted by The Cumbrian Castle listing. at 6:48 pm