The manorial complex at Lammerside was large and consisted of a hall (possibly fortified) a gatehouse, attendant buildings, landscaped gardens, a barmkyn or simple curtain wall, a road approaching from the South, and to the South East, a bridge over the River Eden.

The above photo shows the roads, cut into the top soil and still visible to this day. The road disappears down to the River Eden to the right of the photo, and there are two visible trackways to the left of the photo and in the centre, both leading ultimately to Lammerside Tower, out of shot to the left. 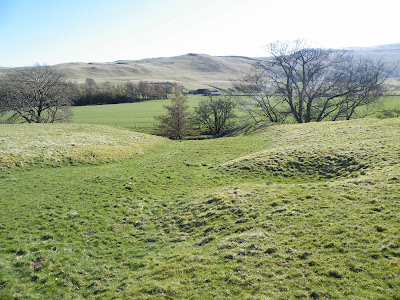 The photo above, shows the roadway clearly leading down to the river. The limestone built bridge, probably built by the Warcops when they inhabited the hall at Lammerside, would have had a direct route to the road running through Mallerstang, North to Kirkby Stephen, and South, ultimately, to Sedbergh. The hall at Lammerside (now long gone) and the tower would have been visible from across the river as guests approached. They would then have seen the hall and all its buildings as they crossed the river, and made their away up the dedicated road heading North. This was all designed to impress those who visited the hall, and to impress on them the importance of the family in the local area. 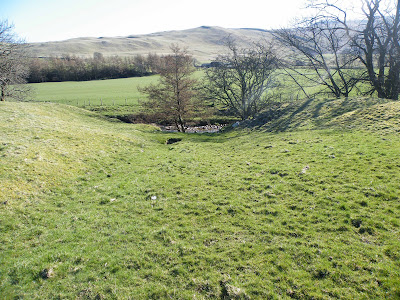 Another view of the surviving trackway leading down to the bridge. 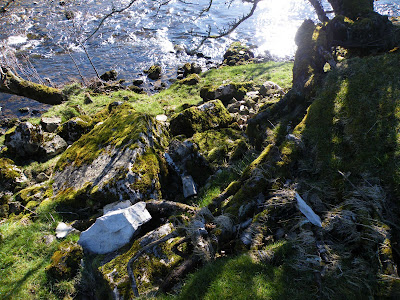 The photo above probably shows all that is left of the bridge, dismantled by the Whartons when they took possession of Lammerside. As well as dismantling the bridge, the Whartons tore down the hall, now only a feint earthwork in the hill side, destroyed all the attendant buildings, and probably converted the tower we see today, into accommodation. It is their possession of the Lammerside buildings, that has resulted in the tower mistakenly being identified as a pele tower. In all likelihood, this surviving building was in fact the gatehouse, not the hall (fortified or otherwise) of the complex of buildings. It seems that the Warcops of Lammerside, sandwiched between the Cliffords of Pendragon to the South East, and the Whartons of Wharton Hall to the North West, were in an almost perpetual state of neighbourly dispute, and after many years of bullying by their Wharton neighbours, finally succumbed. The Whartons all but wiped Lammerside and the Warcops off the map.
Posted by The Cumbrian Castle listing. at 9:28 pm