Lammerside deserved another visit...I haven't been there since December 2005....and this time the weather, although cold, was much better. The earthworks also look more defined, the grass was just the right length.

The above photos shows the earthworks that now show where the surrounding barmkyn or curtain wall would once have run. This view shows the earthworks at the South side of the tower. They run from right to left, and continue right up the hill (out of shot) and would originally have surrounded the whole complex of buildings. At the top of the hill, the buried footings are surmounted by a modern fence, re-enforcing the medieval boundary.

The photo above, shows the tower looking from the West, at the top of the hill. The earthworks in the foreground, are thought to be the remains of an ornamental garden, probably placed here to give the viewer the best panoramic views of the tower and its attendant buildings, and Nateby Common. The fence, sitting on top of the medieval boundary, can just be seen to the left.

The photo above, shows the hall, looking at the Southern wall. The earthworks in the foreground would have been a substantial building, with thick walls, that would most likely have butted up against the now exposed face of the tower.

This photo shows a view from the first floor of the tower. The collapsed floor can just be seen in the foreground. 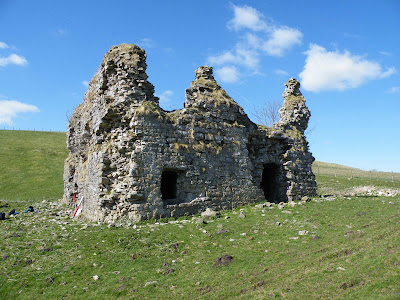 View of the South East corner of the tower. This photo shows just how much of the cladding has been destroyed or removed over the years, exposing the rough rubble from which the tower is constructed.
Posted by The Cumbrian Castle listing. at 8:55 pm