Smardale Hall
nr Crosby Garrett
Cumbria
Smardale Hall, now part of a working farm, lays about a mile and a half South East of the small village of Crosby Garrett. The hall sits in a prominent position overlooking Scandal Beck, and the small unused ford that crosses this narrow stretch of water. It's thought that a small motte may have been the original fortification on this site, with the original hall being built sometime in the late 14th century, possibly around 1388 by the Smerdales. The original earthworks are still meant to be evident, although these were not seen on my visit. 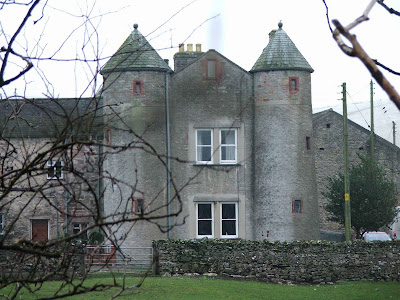 The hall as seen today, is, to all intents and purposes, a 15th and 16th century house, with scant elements of the original pele tower surviving. These earliest 14th century portions may only be limited to a newel, the central support for a spiral staircase, in one of the two corner towers, possibly the one on the right of the above photo. There are four towers in total, situated at each corner of the main part of the house. The two rear towers probably date from the 15th and 16th century rebuilding of the house, whilst the two front towers are older, and at least one of these two, dates from the late 14th century.

It is thought that the hayloft, a large building that still stands, attached to the rear of the present hall, was the original great hall, indicated by the survival of some decorative plaster work. This building would have formed part of one side of the whole recangular courtyard layout, with the long, four towered builing forming the top end of the enclosure. The following plan of the original layout of the site shows how it would once have looked. 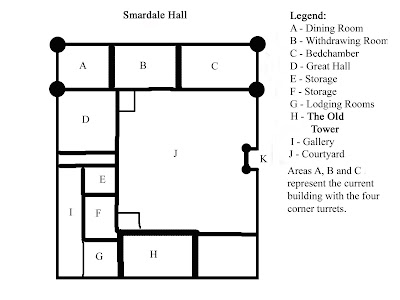 The Old Tower, as marked on the above plan, was a 14th century defensible tower, which was unforunately demolished. 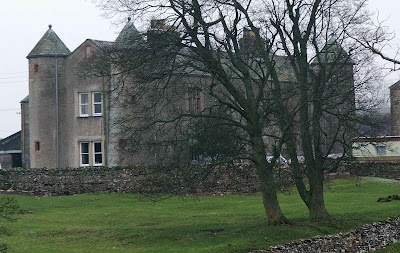 Looking at the above photograph, it's just possible to make out the other two towers at the rear of the building. These towers (behind the trees) are the later of the four towers. The two at the front on all the photos here are the South East and the South West towers, and as such, are the only remnants of the original pele tower. The walls of these two front towers are said to be much thicker than the two rear ones, possibly indicating their defensive qualities.

The hall was later owned by the Warcops, who also had strong links with Warcop Tower in the small village of Warcop. The hall can be viewed from the nearby road, and also from the walk along the now disused railway. This is one of those sites that is best viewed in winter when the trees are bare.
Posted by The Cumbrian Castle listing. at 4:43 pm

I think you will find that all the 4 towers are a 19th century addition to the building. There exists a picture of the hall without the towers.

Hi Matthew
Someone local told me the building is a great big folly but it certainly looks like the real deal 14th century stylee close up. Has a very scottish castle look. I wonder if the farmer just tells people it is a folly because he doesn't want the interest. It is listed on the british listed buildings site as 1 x 14th C tower and 3 x 16th C and you would think he would know.
Great site! Keep it up!
Sakina