Some of Kendal's interesting buildings.

Kendal is littered with interesting, quirky and architecturally valuable buildings. From the oldest inhabited building in the town, the Castle Dairy, to the shops on Highgate, Strickland Gate and Kirkland, Kendal has many gems.....some hidden, some plain to see. Here are some photos of some of these buildings, along with a little information.

Situated at the West end of Stramongate, the house is reputed to have been built in 1546, although the date stone now mounted above the central dormer window is now disputed. Certainly built sometime in the 16th century, it was originally erected as a town house for the Bellingham family, a local well known land owning dynasty. 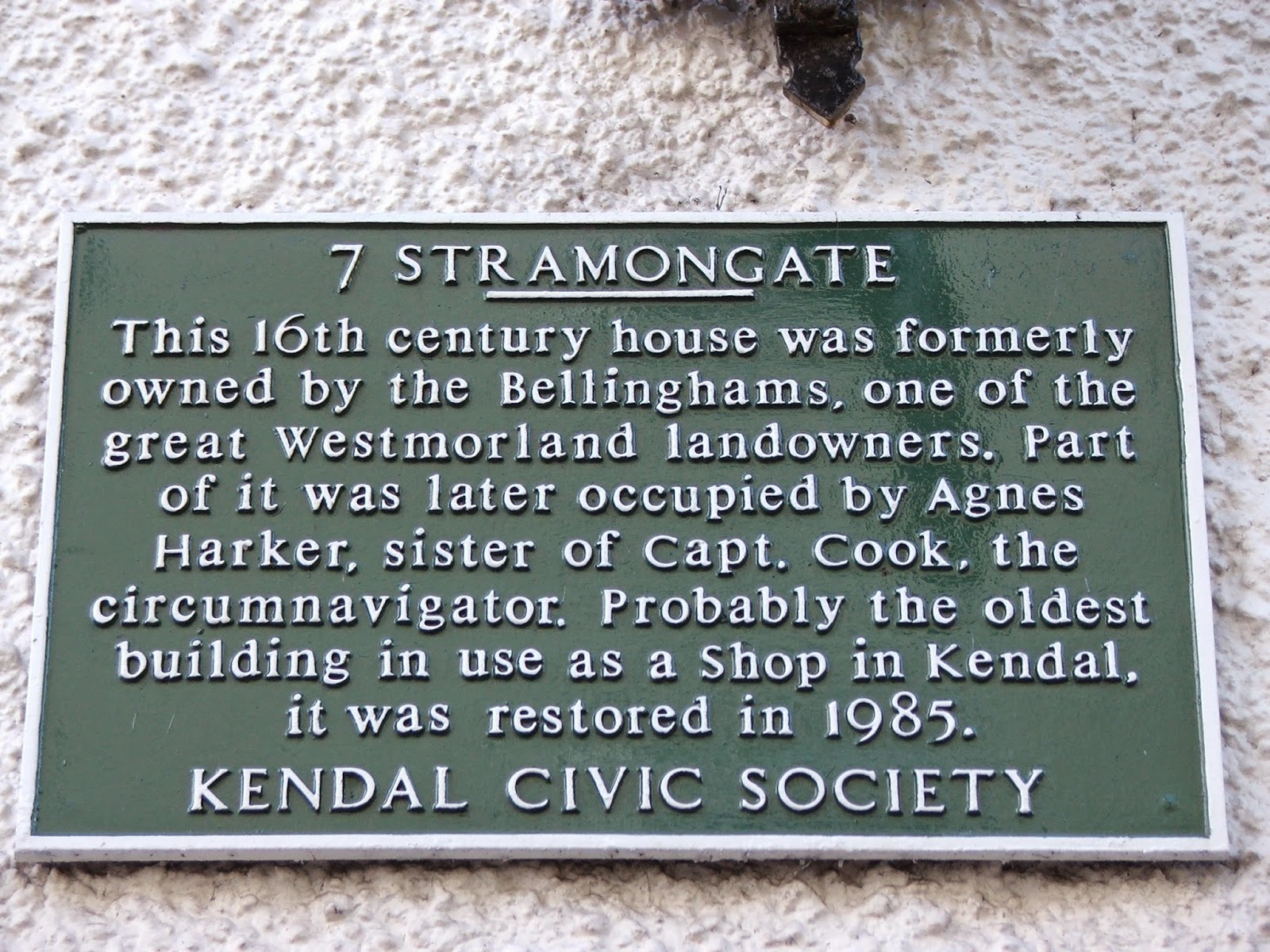 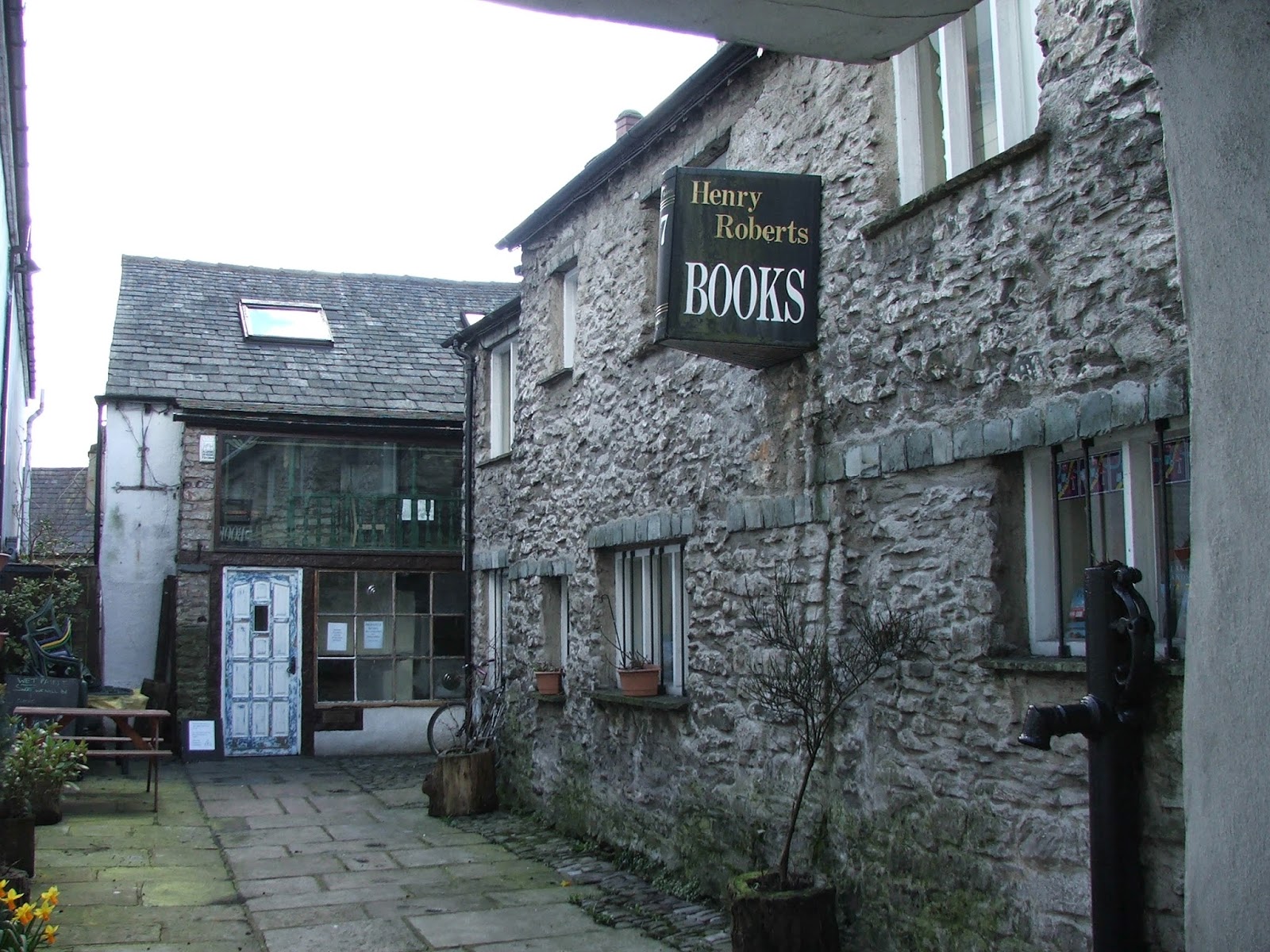 Above. The yard of number 7, with water pump and stable building at the rear. 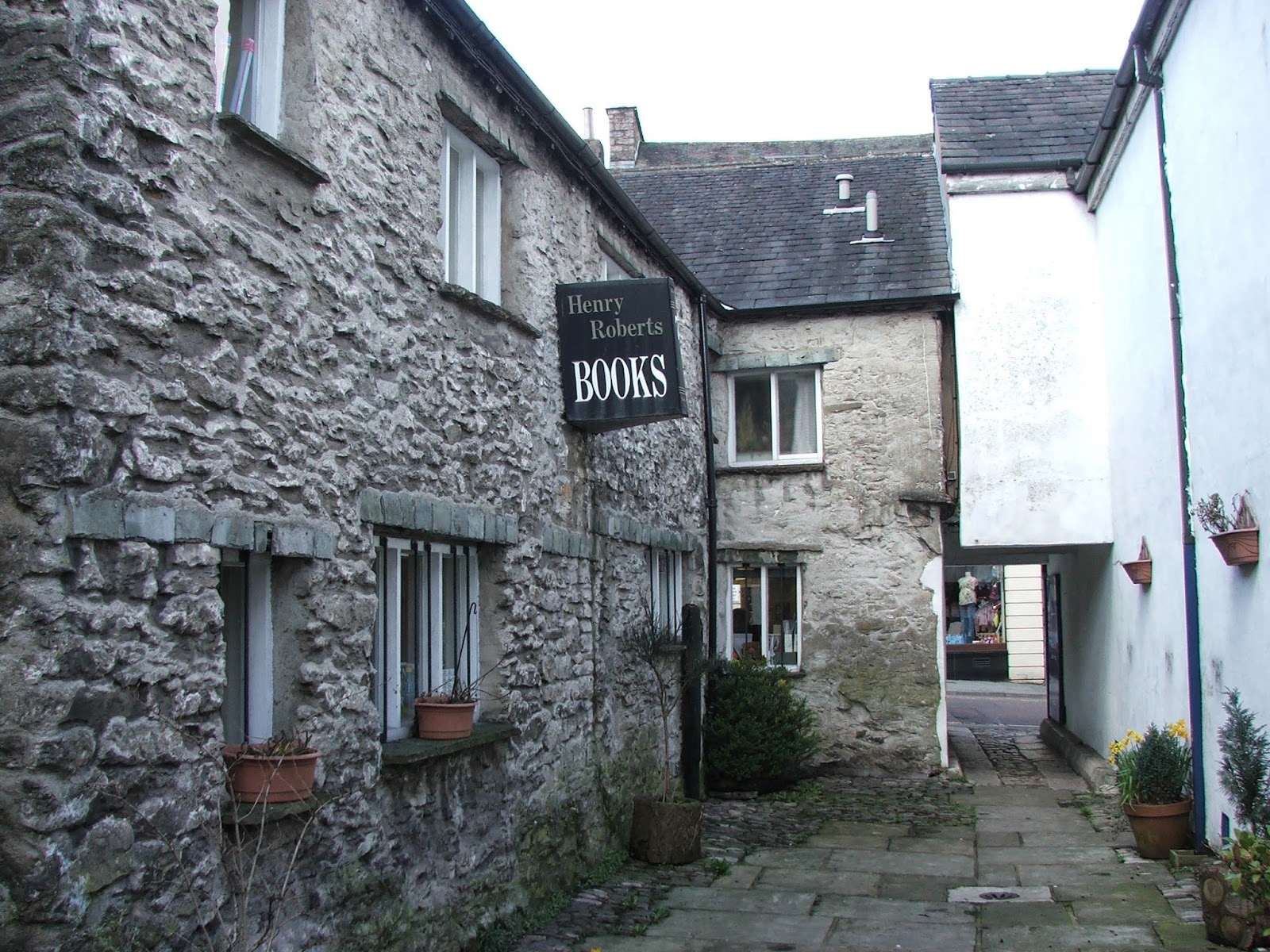 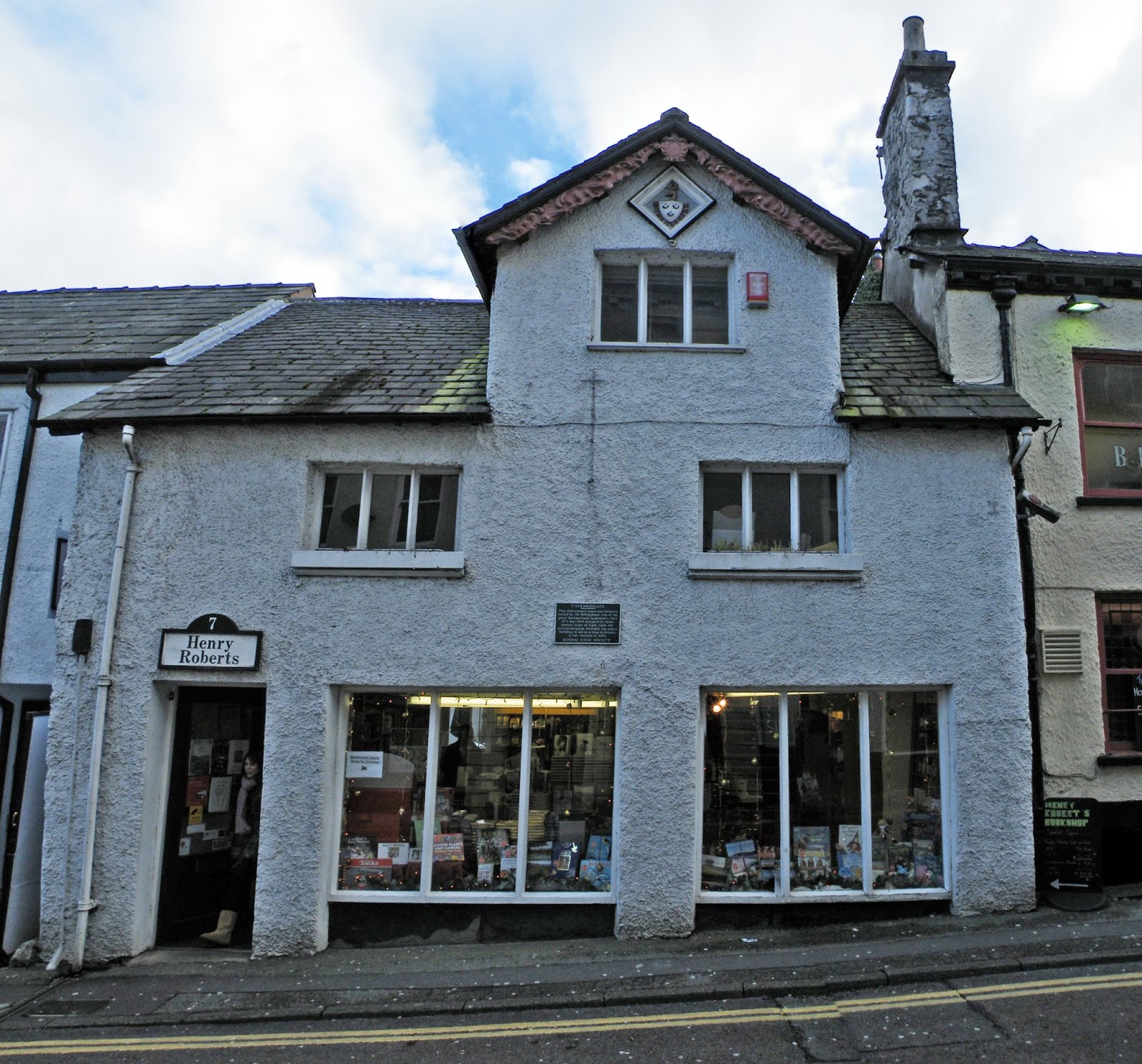 A local story tells us that part of the house was later occupied by Agnes Harker, Captain Cook's sister, though much research has yet to prove that Captain Cook had a sister called Agnes. Interestingly though, Henry Roberts was a sailor who served with Captain Cook on HMS Discovery. The house is probably the oldest building in Kendal, still used as shop premises. In 1985, the property was restored to its current condition.

The house was built in 1769 and is now used as a hotel. Above the door way onto the street, the following inscription has been discovered: TO THE DWELLERS IN THIS PLACE GOD GRANTE PEACE. 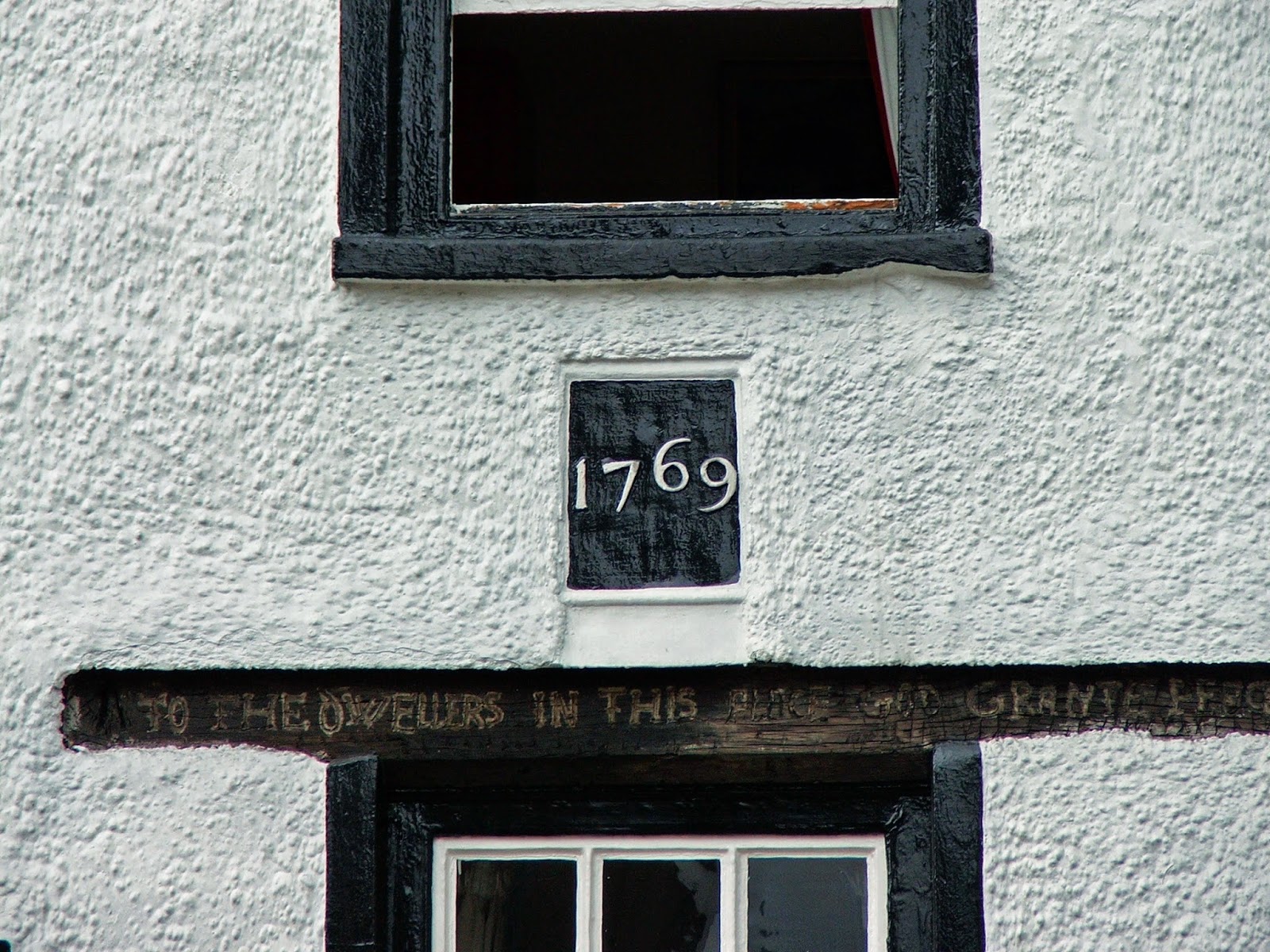 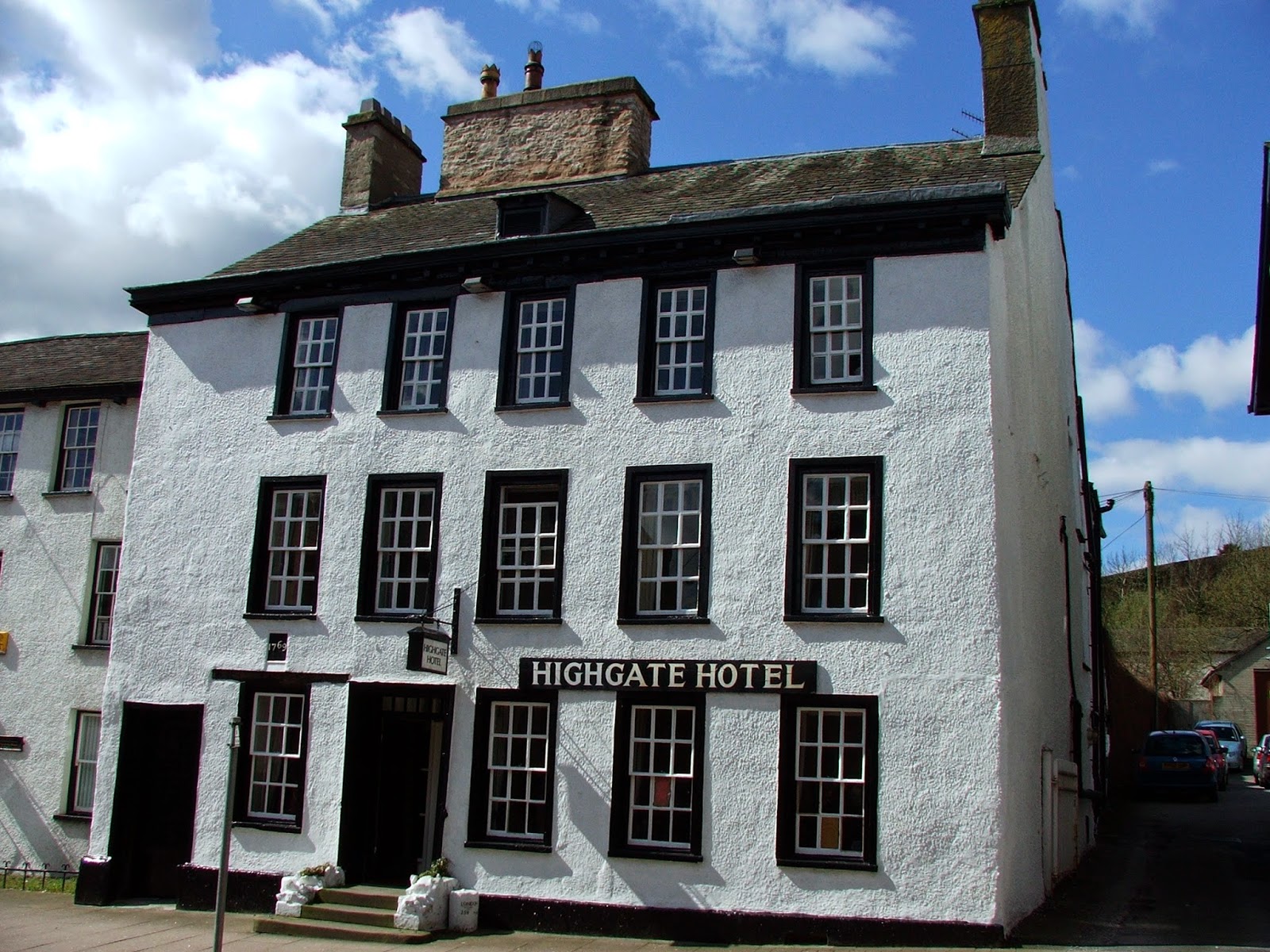 The building we see today, Pear Tree Barn, was built in 1845, but there was a chapel on this site before then. 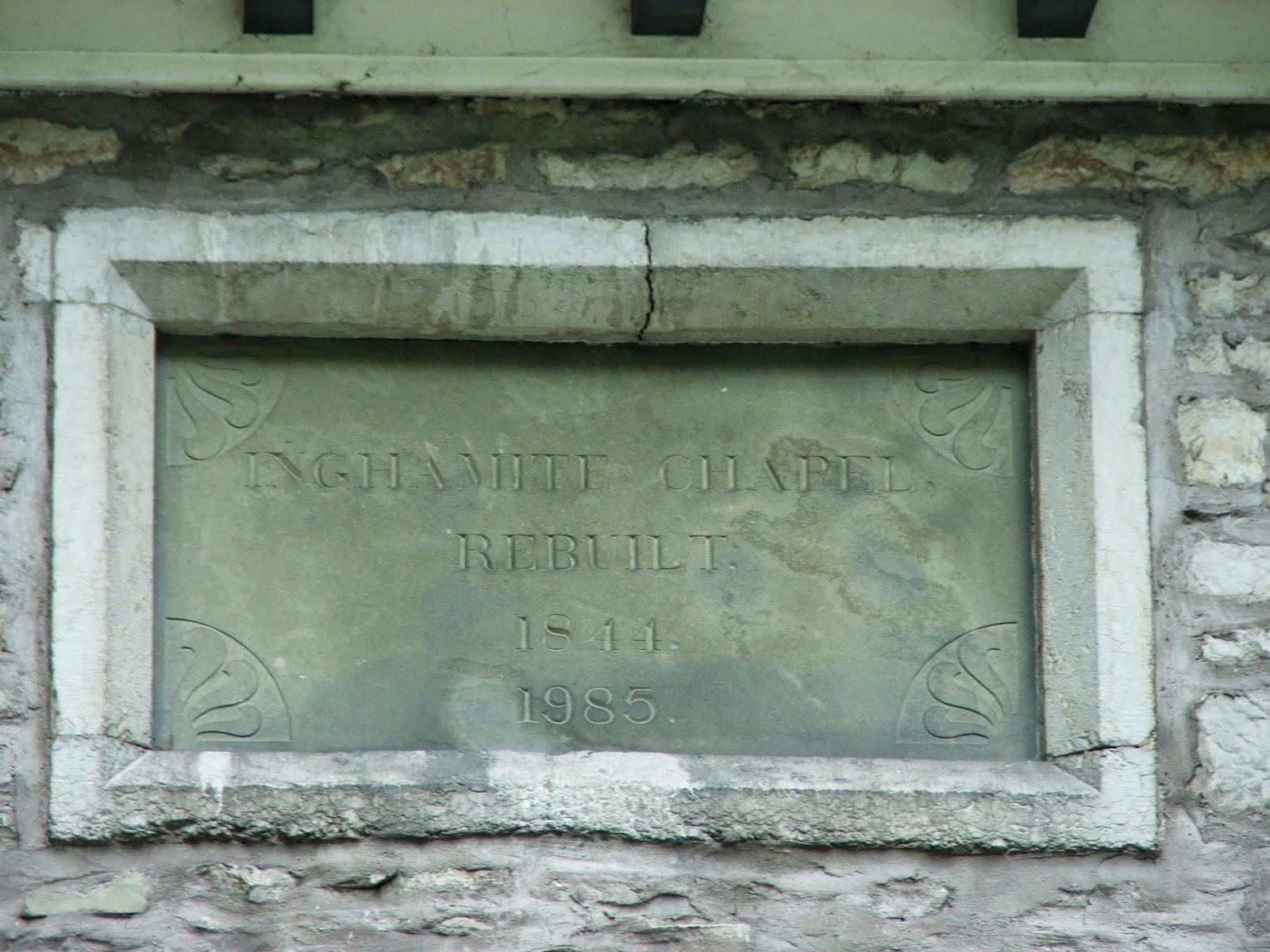 Above. Plaque showing the date the chapel was rebuilt and converted. 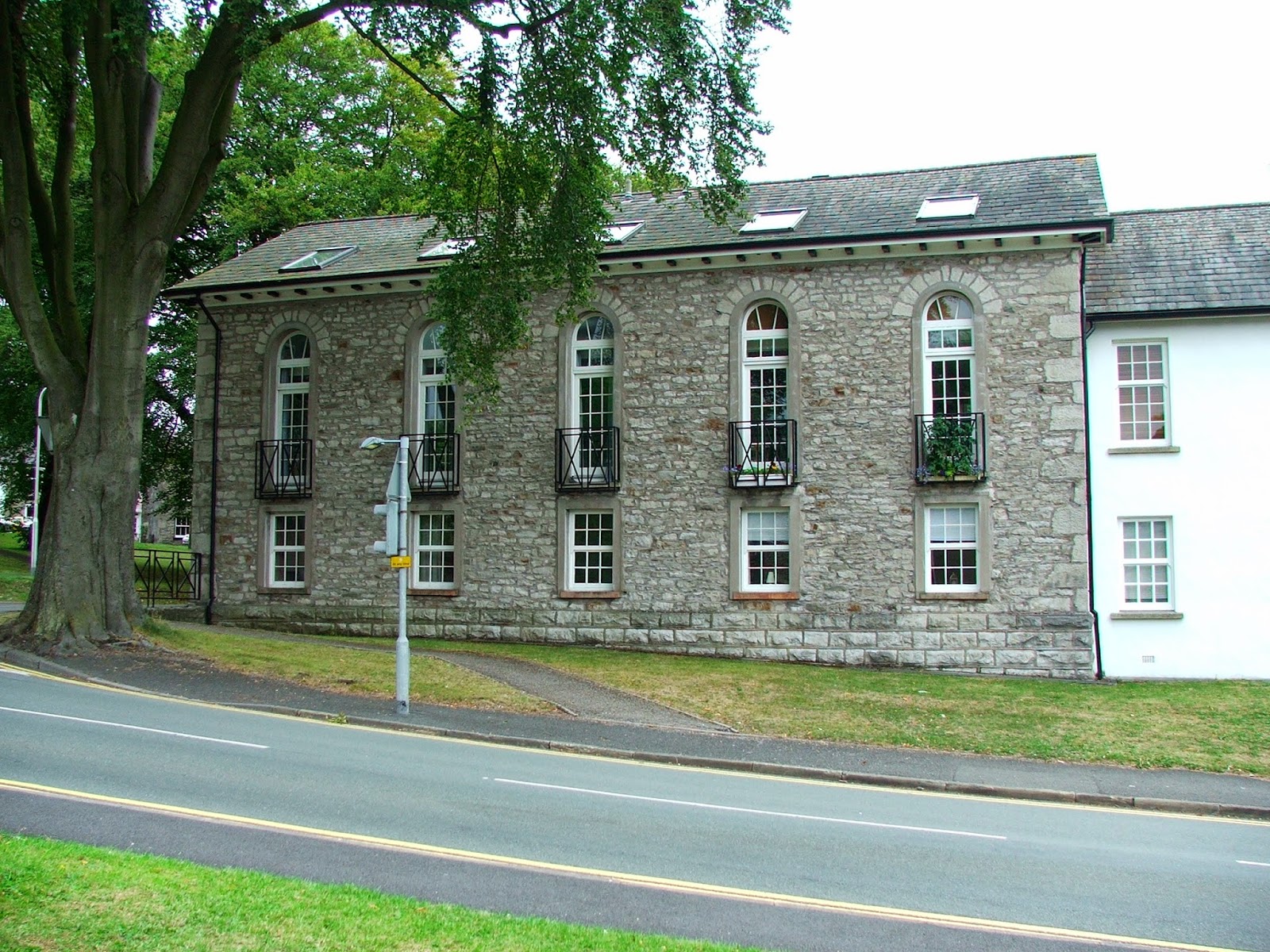 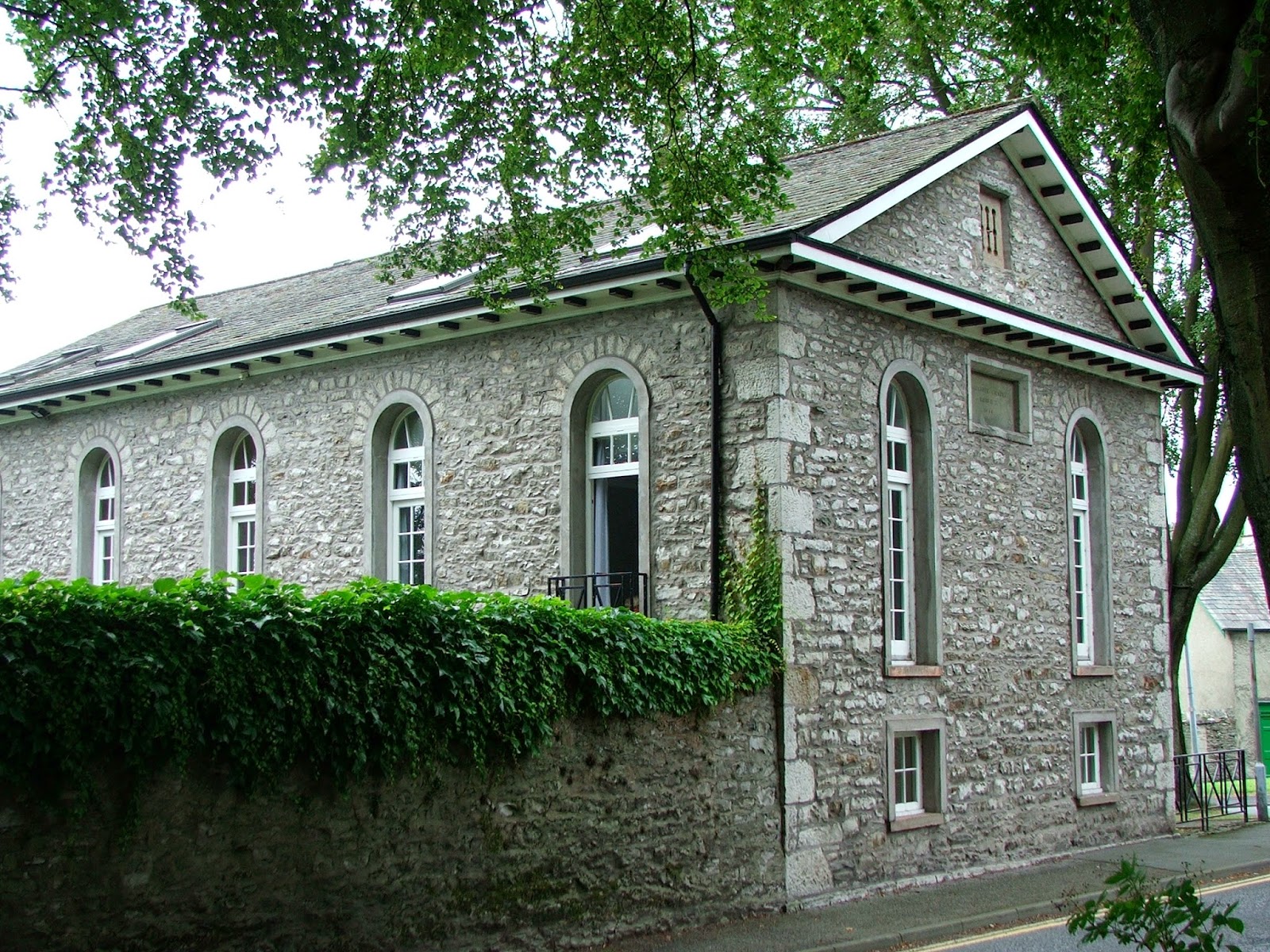 The Inghamites managed to purchase a small pocket of land at the top of Beast Banks, about a hundred yards from the chapel, and they used this as their burial ground until it was closed in 1855.

The chapel has been converted to flats now. 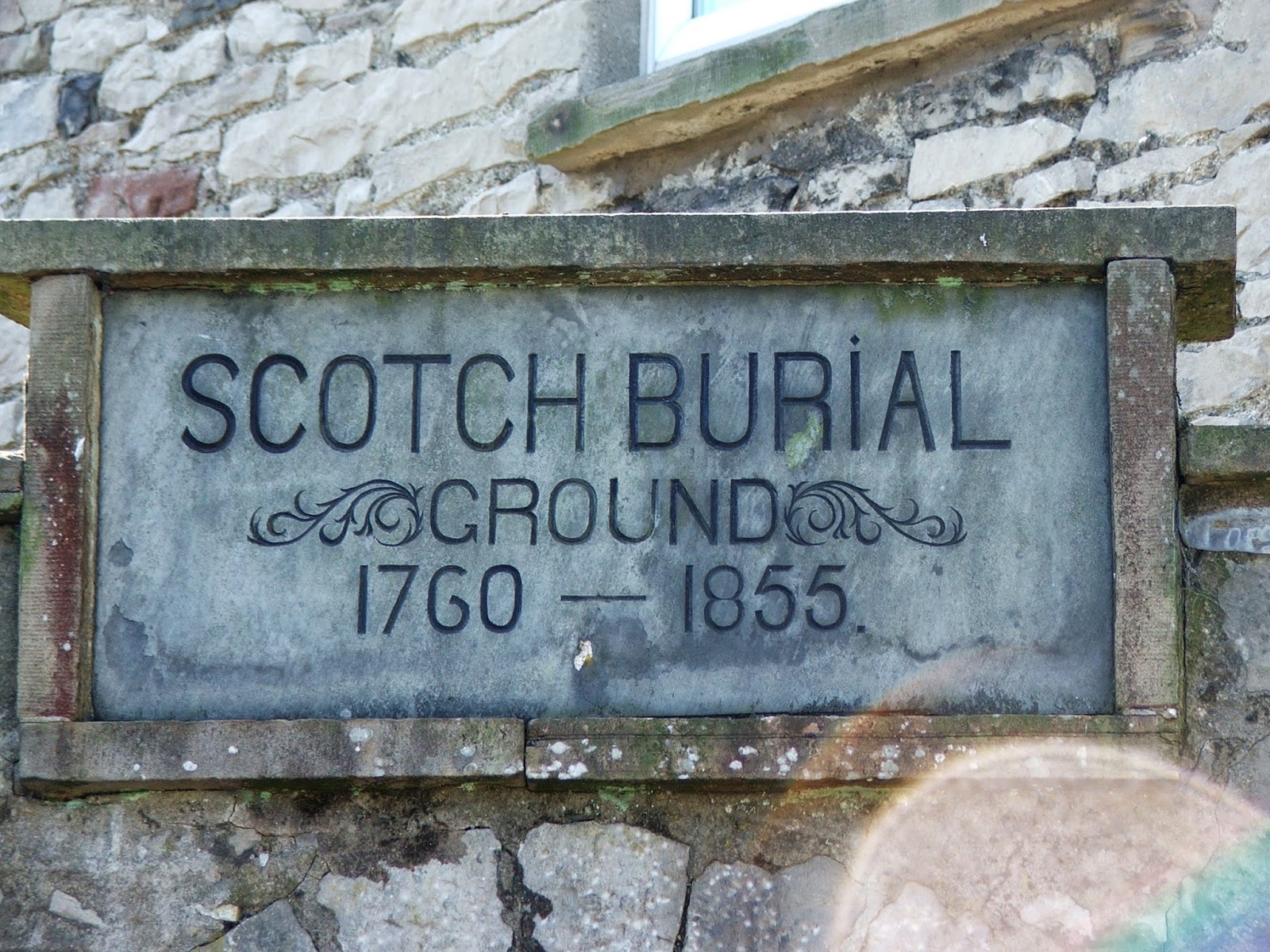 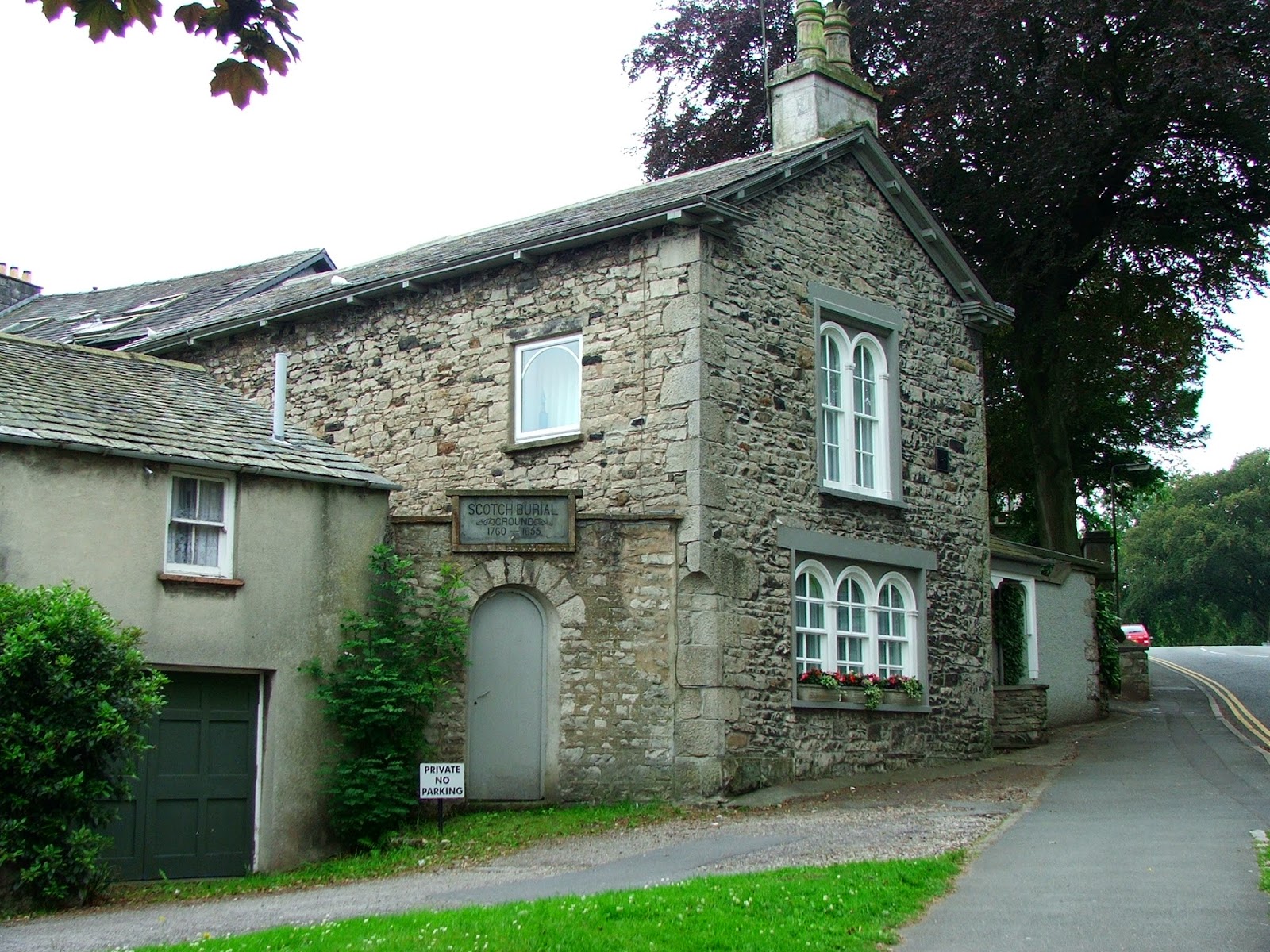 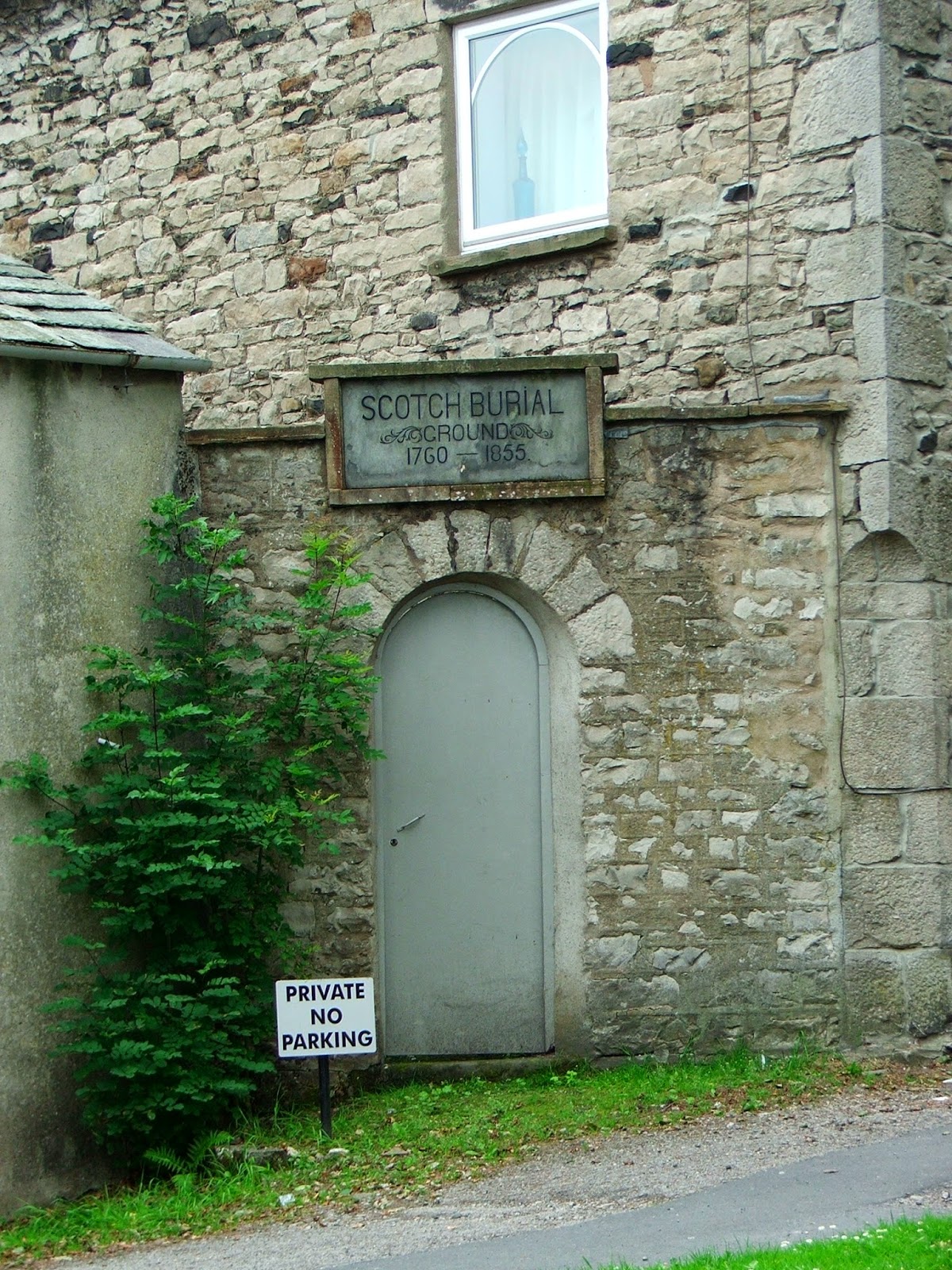 The Kendal Bank of Maude, Wilson and Crewdson opened on the 1st of January 1788, on the same day as Wakefield's Bank in Stricklandgate. When the two banks joined forces in 1840, they eventually moved to the purpose built Kendal Bank building in 1873. The firm merged with the Bank of Liverpool , which in turn became Martin's Bank in 1928, eventually becoming Barclays Bank in 1969. 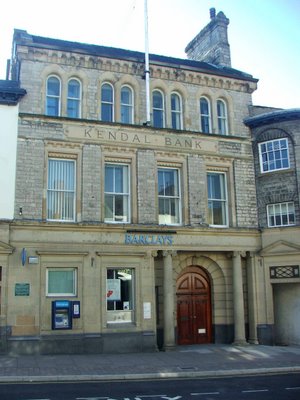 Kendal Bank was licenced to print its own money at one point. In 1797, when the Bank of England was unable to pay in gold coinage, at the height of the war with France, the bank issued its own banknotes, called Promissory notes. Many high ranking local businessmen and politicians put their hands to a document in February of 1826, stating that they had every faith and trust in the Kendal Banks, and that they would gurantee money lodged with the banks.


Originally built in 1591, the Moot hall was erected as a town hall, administrative centre of the town, court house and gathering place when the castle was no longer used or usable. It was one of Kendal's timber and stone constructions. It contained offices and the 'Court Loft' where offenders were often kept before they were tried in the courts below. In 1712, on the 11th of October, the Moot hall was the scene of debate, when the magistrates of Kendal summoned surveyors of the town's roads to appear before them. The session was called to discuss why the surveyors had not made essential repairs on the Barony's roads. In 1729, the hall was almost entirely rebuilt, with new windows, a courtroom and an upper storey with a cupola and clock. 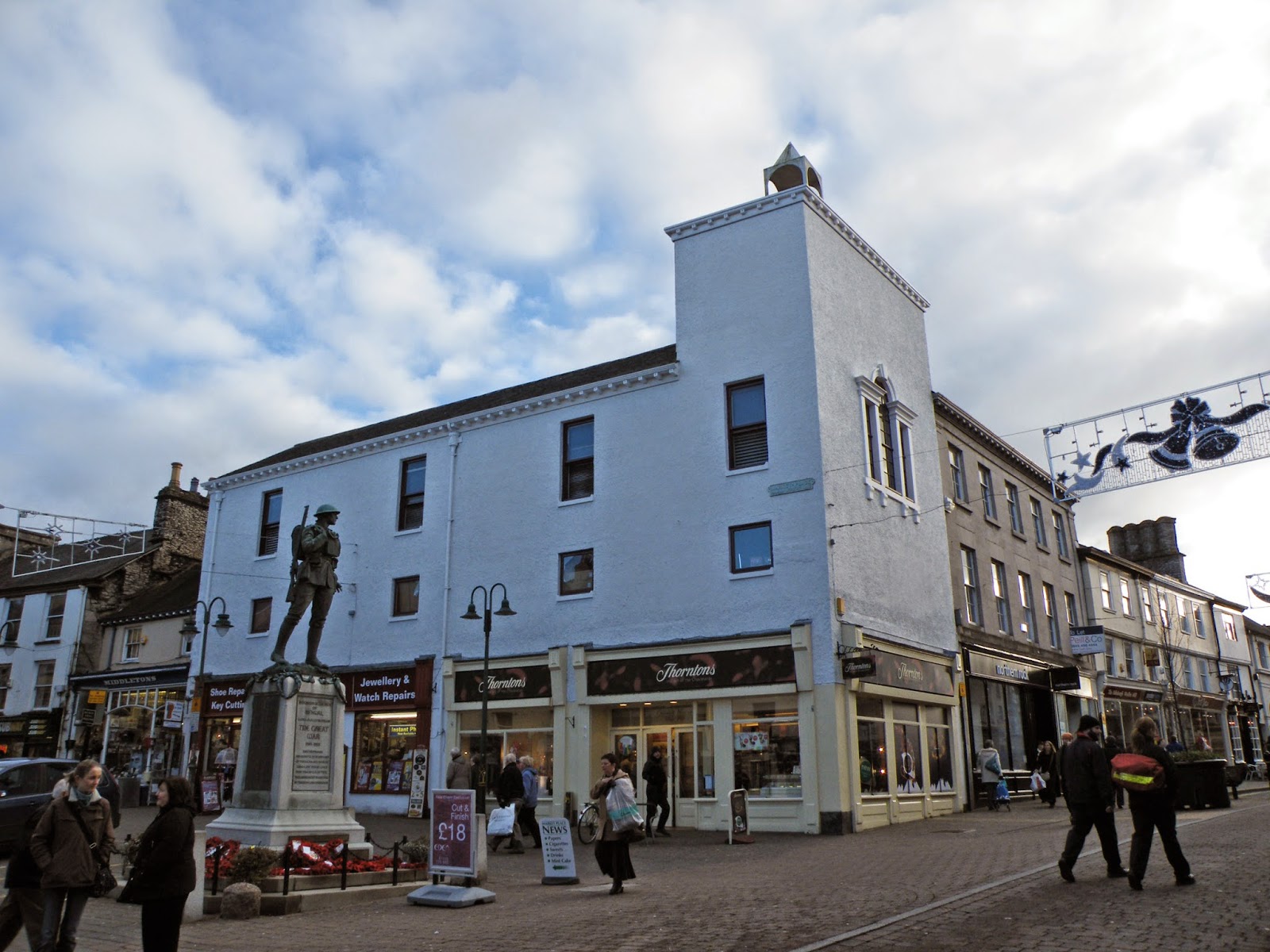 The Moot hall was used for court proceedings as well. For example, for the taking of oaths in support of the current monarch: "Summons from Daniel Wilson, John Archer and Anthony Askew to Thomas Shipherd, George Hilton, John Hale, John Burrow and William Clawson, all of Beetham, to appear at the Moot Hall in Kirkeby Kendall, to take the oaths prescribed for the further security of his Majesty's person and Government and the succession of the Crown in the heirs of the late Princess Sophia, being protestants, and for extinguishing the hopes of the pretended Prince of Wales and his open and secret abbettors. Dated 15 December, 1715. Similar summonses to Mrs. Askew, widow in the island in Applethwaite, Miles Atkinson and Benjamin Harrison both of Applethwaite, James Longmire de Linefitt, James Longmire de Orrest, John Longmire de Calgarth and George Elleray de Houe of Applethwaite, Robert Stephenson of Newhouse and George Dennison of Mirehead, both in Grayrigg, Samuel Newby of Tenterden in Docker and Thomas Dawson of Crosthwaite. Dated 15 December, 1715. 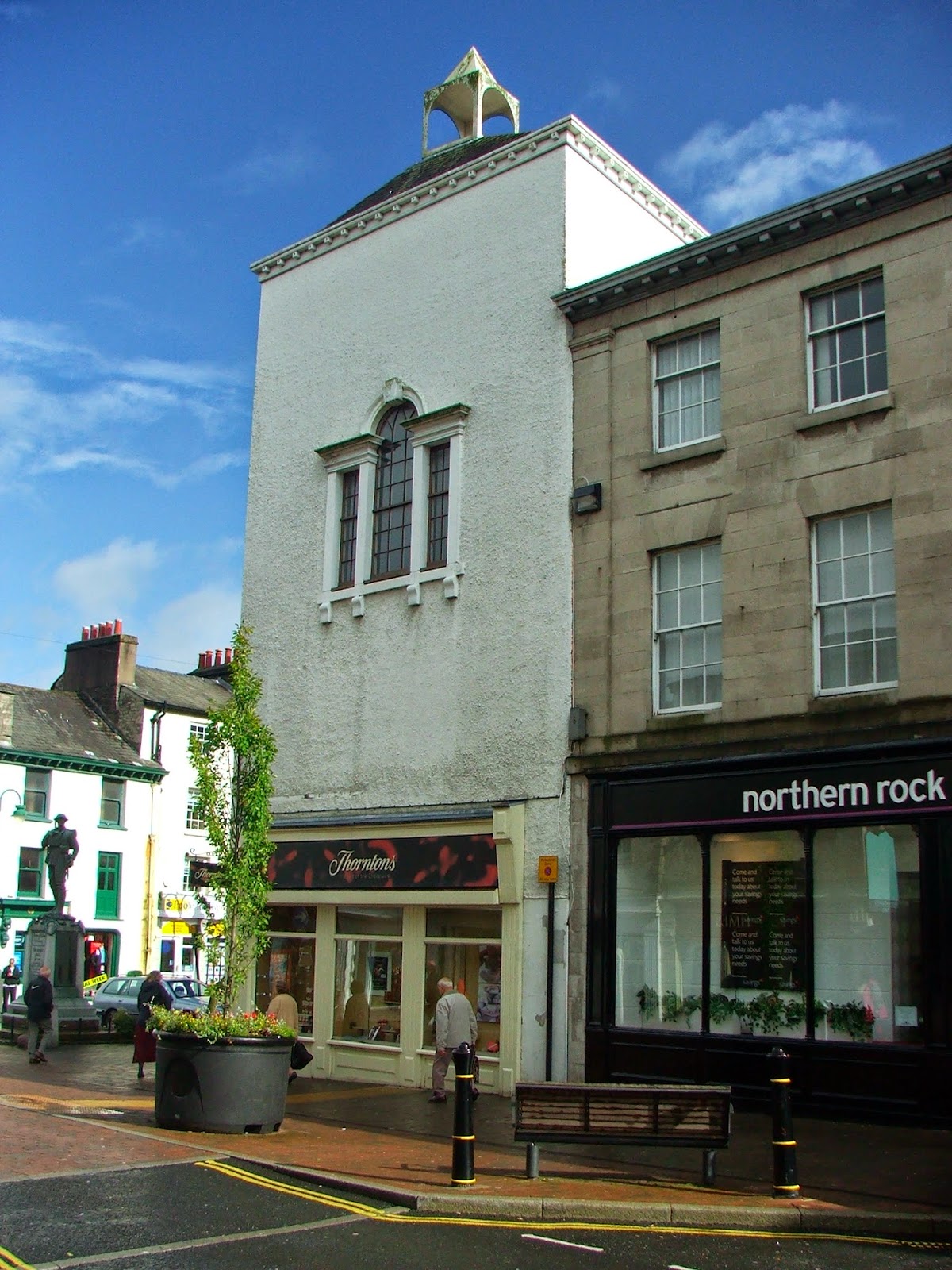 And also, in relation to Window taxes: The High Constable in her majesty's name is to issue warrants to the Petty Constables to warn the collectors of the duties on houses and windows to make a strict survey of all houses (except cottages) and take an exact account of the number of windows or lights in each house, from one to thirty, and to charge the inhabitants or occupiers of the same without concealment, love, favour, dread or malice upon pain of forfeiture of any sum not exceeding £5. With three columns:— the first to contain the just number of windows or lights from one to thirty; the second to contain the Old Duty, i.e., for every house having under ten windows, 2 shillings, for every house having ten and under twenty, 6 shillings, and for every house having twenty windows or lights 10 shillings; and the third column to contain the additional duty according to a late act of Parliament, i.e., for every house having twenty and under thirty windows the sum of 10 shillings, and for every house having thirty windows and upwards the sum of 20 shillings, over and above the old Duty. The same to be returned to her majesty's Justices of the Peace as shall be assembled upon Saturday the 4th day of April next at the Moot Hall in Kendall. John Meredith, surveyor of the said duties, will give his attendance to accuse such collectors as shall omit any part of their duty in the premises to the end that the penalty of £20 may be levied of every offender according to law. Given under our hands and seals the 21 day of February, 1712 (extracts taken from British History on line) 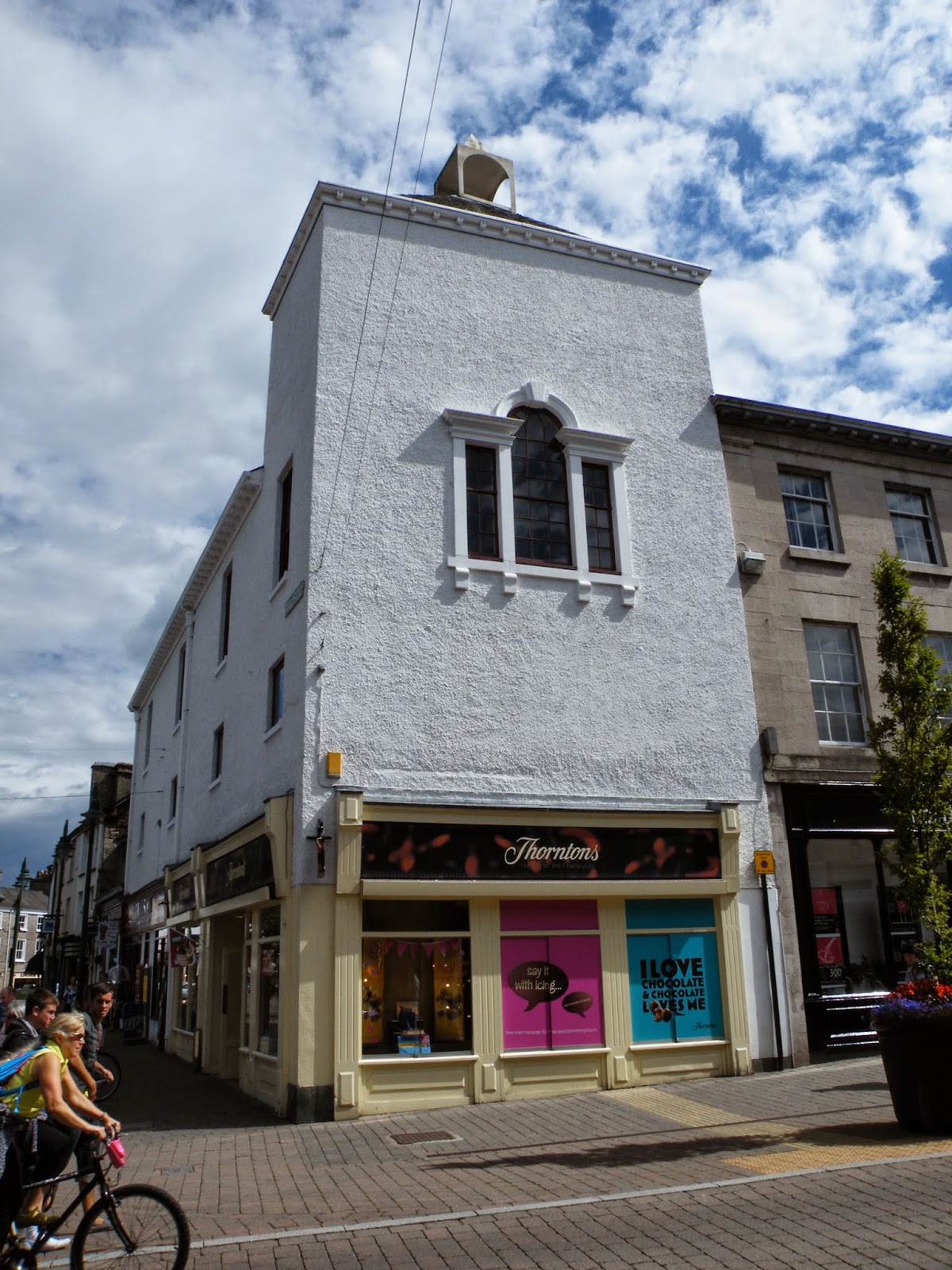 The Moot Hall was used as the Town Hall and courtrooms until 1859, when Kendal Corporation purchased the White Hall Assembly rooms at the top of Lowther street and moved their administrative offices there. The ground floor of the Moot Hall was converted to shops with some storage and living quarters onthe first floor. A small police station was also situated here. The top floor of the building was used as the Council Chamber until 1836. Under the market place, the 'Black Hole', a primitive lock up, was situated.....used until this time (1836) when a replacement was built in the new police offices in Old Police Office Yard on Finkle Street. The clock, seen on many old black and white photos of the building, hung from the cupola from 1840 until 1861, when it was donated to the church of St Thomas at the foot of Windermere Road, where it remains to this day.


The original building burned down in 1969 (?) and the replacement was designed to look as close to the original as possible. The original Venetian windows of 1729 are still in situ, shown below. 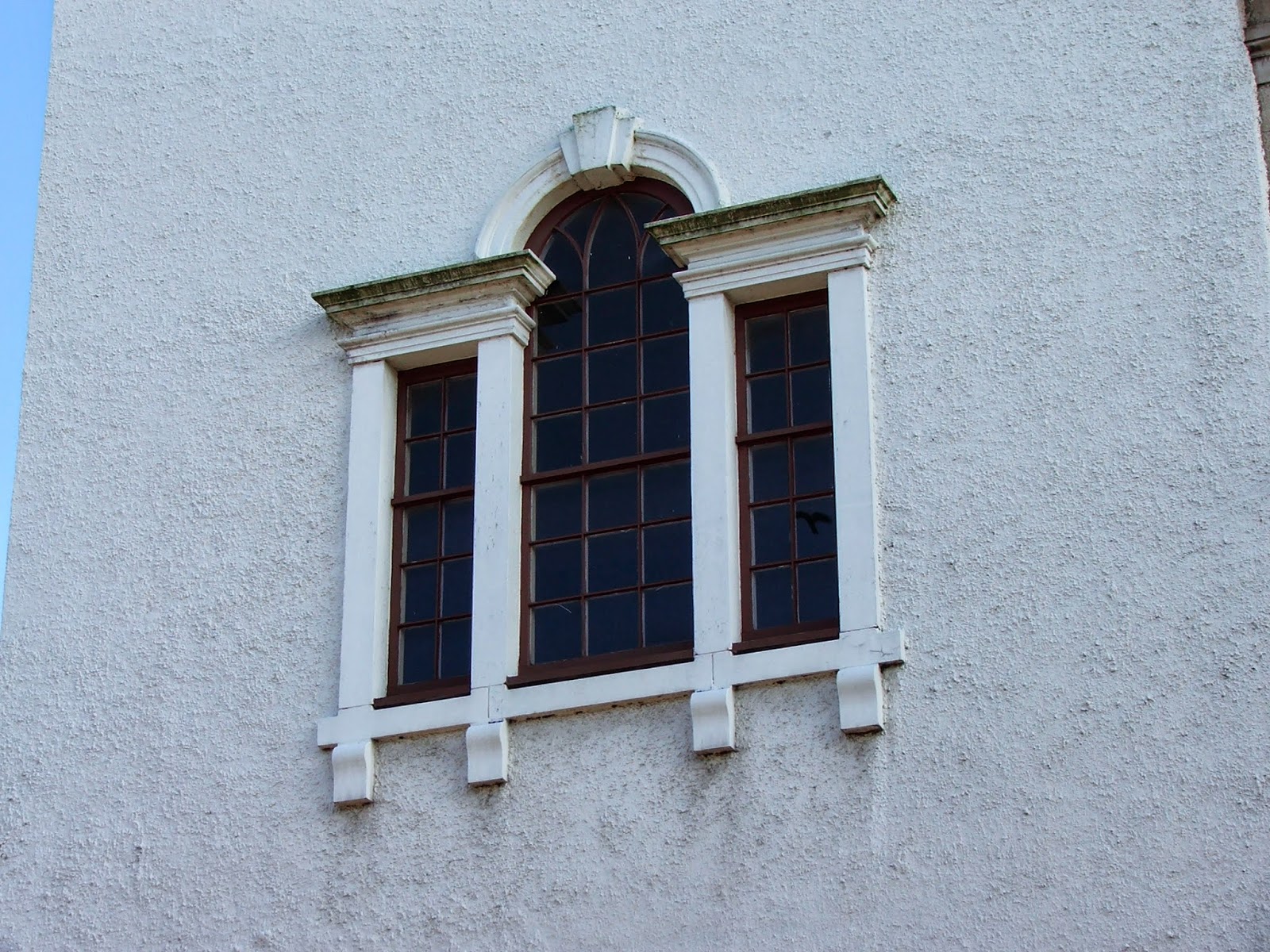 Photos that I've seen of the main street seem to suggest that the current building is a pretty good representation of the original!! Many of us will remember it housing Thorntons, now a jewellers,  it's a hidden gem in that it's history isn't known by many people.
Posted by The Cumbrian Castle listing. at 4:58 pm

When it burnt down in 1969(?) it was Musgroves drapers. The cupola(?) at the top is a wooded copy of the original and I'm surprised it's still standing!

It certainly wasn't Musgroves when it burnt down,it was Bradley's. Musgroves was a different shop in Finkle Street that also suffered a disastrous fire.

It was never Musgroves, which had several departments, some in separate buildings, on the south side of Finkle Street. The building on the corner of the Market Place was surely Brunskills.

It burnt down in the early 1980's and it was a gentlemen's outfitters at that time(similar to Burtons, but I can't remember the name).

Jack72 I'm pretty sure it was called Fosters

It was Fosters Menswear when it burnt down around 1969, I clearly remember the name of the arsonist, Musgroves was in Finkle Street, it re-opened as JR Taylors before becoming Beals, that has now closed