Less than fifty yards to the West of the A6, where the road way crosses over the M6 motorway, about 1 mile outside of Clifton, lays the Trainford Brow long cairn. At first glance, the mound of earth looks little more than that, a long mound of earth following the path of the minor road to Lowther. 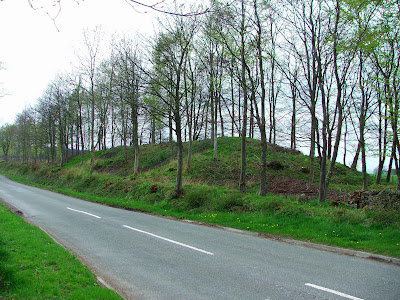 Above. A view of the cairn looking West.
In reality however, it's likely that this is a Neolithic Long Cairn or Bank Barrow. The earthworks are 101 metres long, and point in an East Westerly direction. Its width varies between 13 and 28 metres, and it stands to a height of between 1.5 and 3.8 metres.

Above. A view along the top of the cairn, looking East.
Long Cairns\Bank Barrows are earth work burial sites, usually containing human remains in small pockets of earth, rather than in chambers as is the case in larger barrows. The Trainford Brow long cairn was first noticed in 1933, and visited in 1938, when it was it was described as a likely burial cairn. 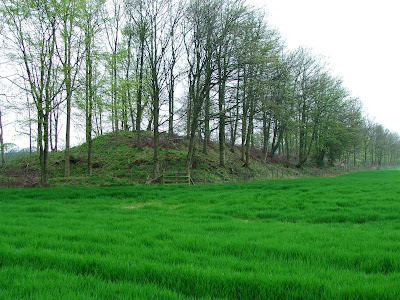 Above. A view of the cairn, again, looking West.
There's still some argument that this is nothing more than a spoil heap from the neighbouring road and motorway, and curiously enough, a map of 1863 makes no mention of the cairn!!
Posted by The Cumbrian Castle listing. at 9:33 am