About half a mile and to the East of Burton In Kendal, just off the A6070, lay the remains of the medieval settlement of Dalton. The remains are to the left and right of the driveway that leads to Dalton Old Hall (and the remains of the pele tower there) The settlement would have been inhabited anywhere between 1066 and 1540, and would have been an extensive collection of buildings, enclosures, trackways and farm land\field systems. 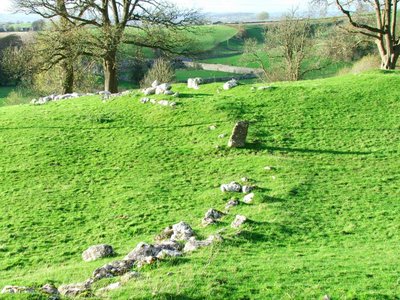 
The remains that can be seen today are quite impressive. There are entire trackways and paths visible, marked out with stone curbs, standing stones and depressions. There are building platforms with some foundation stone work now visible through the soil and grass. Ridge and Furrow remains and lynchets can still be seen at several points on the site (Lynchets are banks of soil at the end of a field that is ploughed over time) (Ridge and Furrow consists of long raised ridges seperated by ditches used to prepare fields for cultivation) 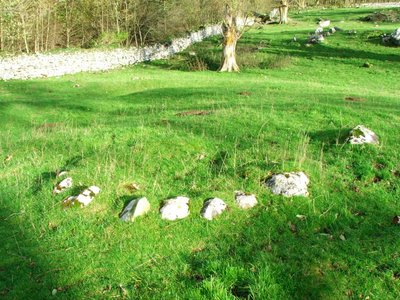 
Enclosures can still be seen in several places. Either as depressions in the earth, or with stones still marking where foundations are buried. 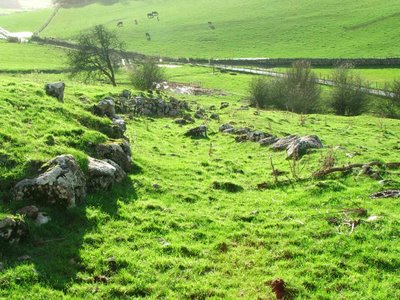 
There are also the remains of building platforms, large square or rectangular areas where the earth has been compacted to allow the placing of a large building.


The site is remarkably well preserved, considering that it probably wasn't occupied after 1540, over 460 years ago. The settlement probably stretched far to the East and the West, but the best remains are in the small area to the east of the drive way to Dalton Old Hall and its pele tower remains.

There are numerous deserted medieval settlements in Cumbria, but most either display no evidence, or slight crop marks, only occasionaly visible. Docker a few miles outside of Kendal was reputedly quite a large settlement. The site is next to the railway, and it's likely that any visible remains were destroyed when the lines were laid and the road bridge built. The only other deserted settlement that I've been able to photograph, was Helsington, and even then, the remains were slight crop marks of a long rectangular building, possibly a long house, with two rooms, and some more slight indentations in the field surface.


The photo above possibly shows the earthwork remains of the long house at Helsington, or it could simply be the remains of some sort of enclosure. The field in which these remains are sited, is full of slight impressions in the soil, possibly more buildings and trackways. This settlement also dates from around 1066 to 1540, although these dates are only a broad time frame between which the settlement may or may not have been inhabited. There are apparently further earthworks, perhaps relating to the same settlement, 200 metres to the South below the farm buildings.