York is noteworthy in England as one of a tiny number of towns with two Norman built castles. Cliffords Tower, the more recognisable and complete of the two, sits on the East banks of the River Ouse, sandwiched between Tower Street and The Castle, whilst the Old Baille sits hidden under a canopy of trees on the West banks of the River Ouse, at the junctions of Cromwell Road and Skeldergate.
The Old Baille was built in 1068 by William the Conqueror, as part of an effort to bring the city under his control, and was the second castle to be built in York in two years. Both castles had been severely damaged, if not completely destroyed by 1069, by a Danish army intent on reclaiming the North of England back from William. Both castles were repaired almost immediately that the Danes had left (paid handsomely to quit England) and the English rebels defeated. 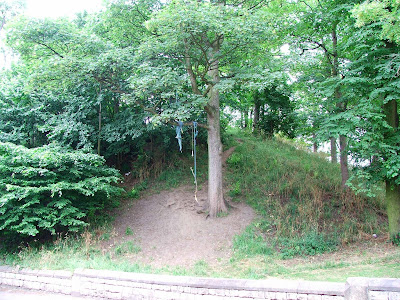 The motte stood to a height of around forty feet and had a diameter of around one hundred and eighty feet at the base. Today it stands to around twenty five to thirty feet in height. Investigations of the motte in 1969, found evidence that it had been constructed in horizontal layers of earth and stone, and during the 1300's, it was topped with a timber structure with a wooden palisade around the summit. It is thought that a flight of steps led to the top of the motte, and that it was protected by a deep and wide ditch. The Old Baille had a rectangular bailey area to the North West, probably where the houses on Falkland Street and Baille Terrace now stand. The bailey was surrounded by a bank and ditch, and probably covered an area of around three acres. 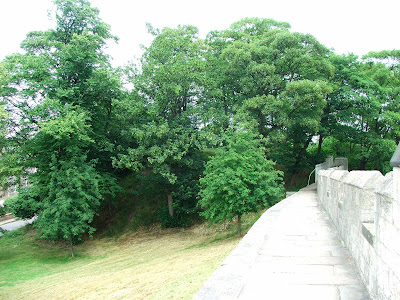 The Old Baille was probably out of use by about 1200, and had been handed over to the Archbishop. Around 1322, Archbishop Melton gave promises to defend the Old Baille if the city would offer up assistance in times of war. He rebuilt the defences of the castle, firstly in wood, and sometime later, in stone. Responsibility for the upkeep of this castle, especially about who was to pay for repairs etc, rumbled on until the middle of the 15th century, when the city of York obtained ownership of the motte and its bailey. 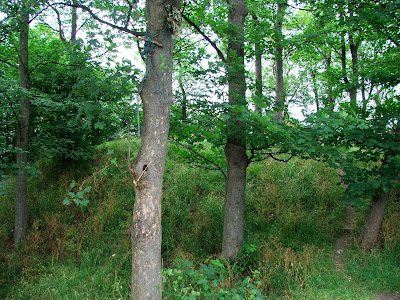 From this time on, the castle area was used for grazing cattle, and only returned to a defensive mode of use when two cannon were mounted on its summit during the civil war. With the restoration of the monarchy, the castle was once again returned to grazing, and in 1722 the summit of the motte was lowered and planted with trees. Between 1807 and 1807 a prison was built over the bailey area. The prison was closed in 1868 and then demolished in 1880. The bailey area was then built over with houses and streets occupying the site. These days the motte has become part of the wall walk, and is easily accessible after crossing Bishopgate Bridge and heading West along the A1036.
Time Team information.

The above link details an excavation of the motte in the late 1960's. Interesting reading!
Posted by The Cumbrian Castle listing. at 8:51 pm