Barker and Lendal Towers, sit either side of Lendal Bridge over the River Ouse. The bridge links Station Road with Museum Street, and was built in 1863 by Thomas Page. Before the bridge was built, the river was cross using a ferry. The towers would have been used to defend the gap in the city's walls that the river created, and to offer a point at which tolls could be collected for goods being shipped in and out of the city.


Lendal Tower lays on the North banks of the River Ouse and if first mentioned in historical documents in 1315, as the 'turrim Sancti Leonardi'. At this time, the tower was circular with a staircase turret on one side. The tower was described as 'a great tower with a chain of iron to cast over the Ouse' referring of course to the chain that would have been strung between Lendal Tower and Barker Tower on the opposite banks. The keepers of this chain, are named, in documents dating from 1380, as John de Poynton at Barker Tower, and Thomas Smyth at St Leornards, or as we know it, Lendal Tower. 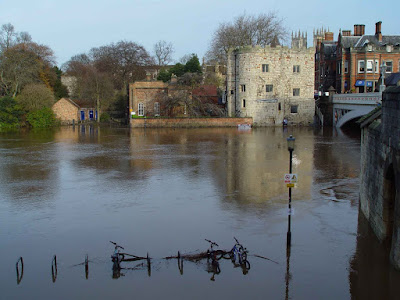 Above. A view of Lendal tower on the banks of the flooded River Ouse.


The tower has been altered over the years, so that it does not now display its circular form. Only on the river side of the walls, can the round walls be seen. It was repaired in 1584 and 1585, and had its roof replaced in 1598. 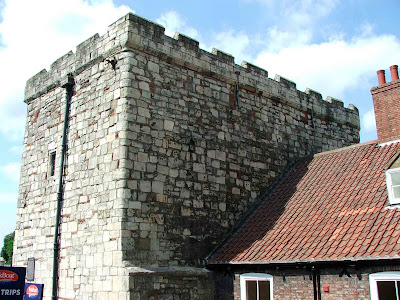 Above. A view of the rear of Lendal Tower.


A proposal was put forward in 1616, to use the tower to house machinery to provide the city with fresh water from the river, but it wasn't until 1674 this scheme was actually undertaken. The tower was rented out on a lease of 500 years, repaired and raised to house the machinery. A pump was inserted into the tower, powered by a water wheel. This was later replaced by a wheel powered by a horse. 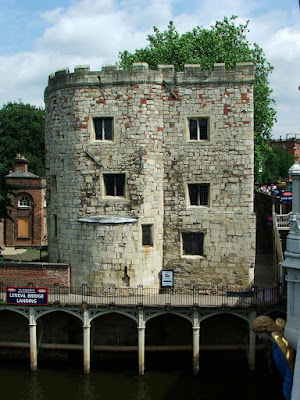 Above. A view of Lendal Tower above the River Ouse.


Drawings and sketches dating to before 1846, show the tower at its post 1674 height, whilst later sketches, dated to after the 1850's, show the tower much as we see today, slightly reduced in height, sometimes partially submerged beneath the swollen waters of the Ouse.


The Barker Tower lies on the South banks of the Ouse, and would have been used to secure the other end of the chain across the river. This tower, like Lendal Tower, served both a defensive and a commercial use. 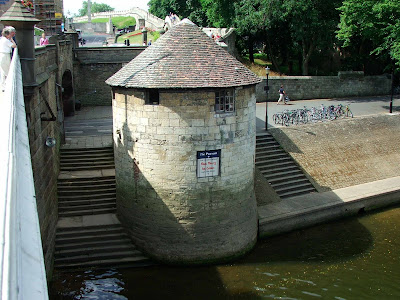 Above. Barker Tower from the bridge.


This tiny river side tower is first mentioned in records dating from 1380. From early sketches and drawings, it is evident that the Barker tower hasn't changed much over the years. The most visible difference is the inclusion of windows just beneath the eaves of the roof. These windows were originally the tower's crenellations. 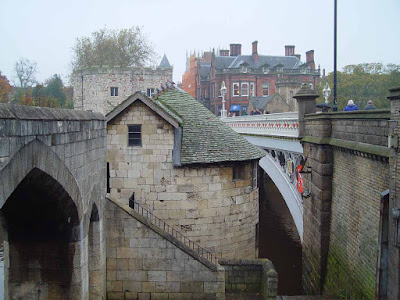 Above. Barker Tower viewed between the walls and the bridge.


Up until about 1863, the tower was traditionally let to the Ouse ferrymen, who were responsible for ferrying men and goods between the North and South river banks here.
Posted by The Cumbrian Castle listing. at 8:24 pm