Hornby castle sits on a hill overlooking the village of Hornby in Lancashire, just off the A683 to Lancaster. 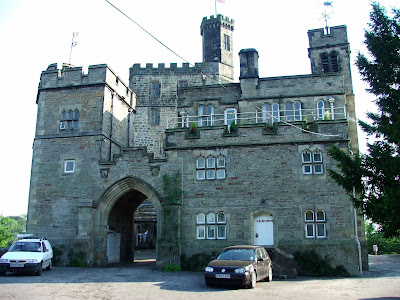 The castle consists of an 18th century house, built around a 16th century keep\tower, all that remains of the previous castle. The tower was largely rebuilt\remodelled during the 16th century. It measures some 11 by 9 metres and has a spiral stair turret that rises above the roof line of the tower. The frontage of the house was remodelled by Sharpe and Paley between 1849 and 1852, and then again by Paley and Austin in 1881, and between 1889 and 1891. The result is a gothic style house, cum castle, with castellated turrets and walls, and a collection of heraldic coats of arms inset in wall niches. 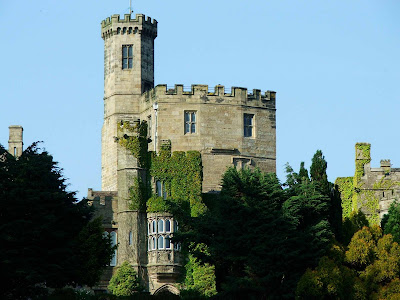 The castle is privately owned, and only opened on infrequent occasions at the behest of the current owners. The castle is visible perched amidst the trees as you drive towards Hornby on your way to Ingleton or Kirkby Lonsdale. 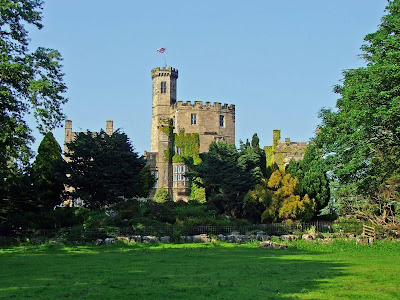 The castle was most likely built as a direct replacement for the earlier motte and bailey (Castle Stede) down by the river Lune.
Posted by The Cumbrian Castle listing. at 6:56 pm

Thanks for this - researching the role of Lord Monteagle in the Gunpowder plot and was most interested to see this was one of his properties.

This was wonderful. I discovered this picture as I was researching my ancestry back to Edward and Thomas Darcy.

We attended the "military collection" at the castle, what splendid people so friendly, inviting us to stay over in our camper. We met the owner too astride his quad bike, splendid fellow, wish he was my old mate !! Is it happening again-hope so. Banbury camper. oxon.