Peter F. Ryder suggests that the masonry remains, shown below, that lie to the East of Catterlen's hall and tower, could be the remains of a second tower. He suggests that Catterlen originally possessed two towers at the East and West end of a walled enclosure. There are, hidden within these walls, a vaulted basement with a blocked spiral stair case, lending some strength to his assertions.

Above. The lower level of the alleged second tower. 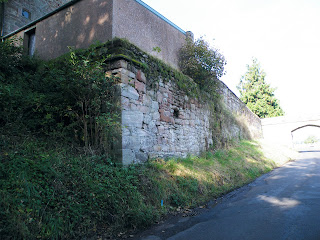 Above. Another view of the lower level of the alleged second tower.


The photo shown above, shows the lower levels of a structure, possibly the second tower, with masonry very similar to that which the surviving tower is constructed of. 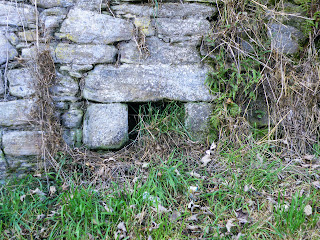 Above. The remains of a small window in the lower levels of the wall.


Peter Ryder thinks this may be the remains of a garderobe chute, and that its existence suggests that upper levels to this structure were originally in place, providing further strength to his ideas of a building here, if not a tower. 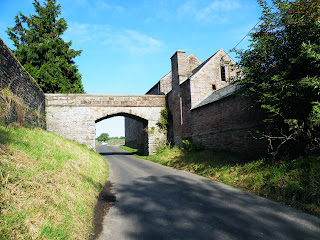 Above. The gatehouse\bridge, showing the newer stone work.


The gatehouse\bridge shown in the photo above, along with the returning wall to the left of the photo, are built of much newer material, dating to sometime in the 19th century. 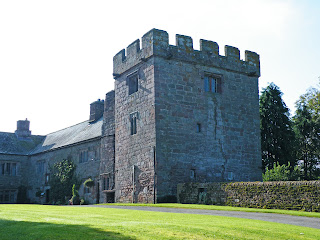 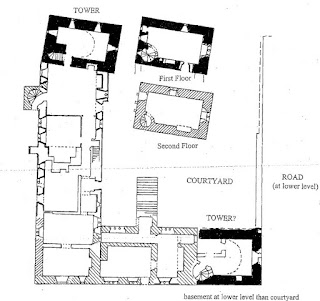 Above. Plan (from Peter F. Ryder) of the layout of Catterlen Hall, including the assumed second tower.

Peter Ryder suggests that the site layout at Catterlen Hall, would have reflected the quadrangular form of Greystoke nearby, but with no enclosure wall and\or gatehouse surviving, it's almost impossible to tell if he is correct in his assumptions.

Posted by The Cumbrian Castle listing. at 9:21 pm