This large earth mound lies a few yards to the West of the church of St Nicholas, and to the East of Lazonby station. It is a huge mound, and only seems to have been labelled a motte by M.J. Jackson in his 1990 book, Castles of Cumbria. It probably stands to around forty feet high, is topped with a stone memorial cross, and has been heavily mutilated on its West side to make way for an access road to the railway station. It is visible from the aerial photos on Multimap's website. 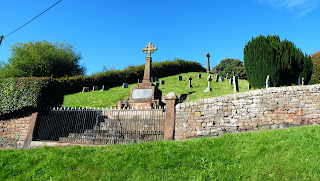 It's also especially visible on Simon Ledingham’s photo on the Visit Cumbria website and the page on St Nicholas. 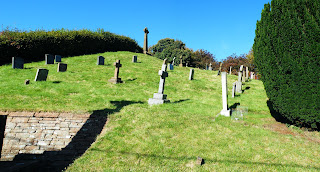 The church of St Nicholas may well have been built in the bailey area, as other motte and bailey sites throughout Lancashire and Cumbria (Melling, Burton-in-Lonsdale, Arkham and Whittington) The present church dates only from 1864, but replaced an earlier church on this site. Easily visible from the roadside and from within the church yard, this is a quite spectacular earthwork...if only there were more documentary evidence to back it up.

Posted by The Cumbrian Castle listing. at 11:16 am