Situated just a few yards to the North of Catterlen Hall, the site of the original late 12th century hall can be still be seen in the field.

All that remains now though, is a rectangular 30 by 20 metre grass covered platform with huge boulder foundations protruding through the turf.

The platform survives to a height of around 1 metre above the surrounding field.

The large hollow, shown above, possibly represents the remains of a cellar or basement. It is edged with stones half buried in the turf. 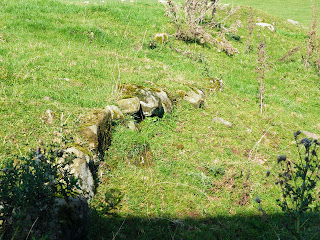 The Pastscape website tells us that there are also faint traces of foundations of a South wing and cross hall in the field adjacent to the tower's platform, though at ground level it was impossible to see these earthwork remains. Alleged to have been built sometime around 1170, it was later replaced, in 1460, by the tower and hall to the South.
Posted by The Cumbrian Castle listing. at 12:32 pm