During the 1950s, as Rispain camp was being investigated, it was mistakenly categorised as a medieval moated homestead or even a castle site. It wasn't until 1978 when the interior of the site was excavated, that it was designated an Iron Age fortified homestead.

Above. Looking North West along the top of the earth banks.


The impressive earthworks consist of a rectangular array of ditches, earthen banks with an interior area of around 220 by 170 feet. The surrounding ditch is around 10 feet deep and is still remarkably well defined (though it has most likely been consolidated at some point)

Above. Looking South East towards the modern day farm.


The excavations of 1978, provided evidence of habitation from around 100 BC to 200 AD. The homestead's defences are incredibly well preserved. An outer ditch, now infilled, can be traced from aerial photos, but the exterior bank and its ditch still stand to an impressive height and depth. 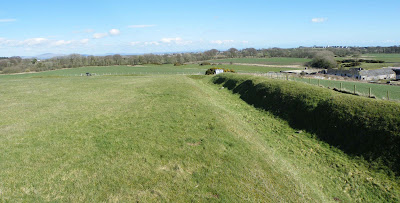 Above. Looking South West from inside the earthworks.


The 1978 excavations threw up evidence of a timber gateway on the North East side of the earthworks, with evidence of a wooden palisade running along the top of the exterior earthen bank. This was obviously a very well defended homestead.

Above. Standing on the causeway at the North Eastern end.

There is also evidence of a large wooden round house in the center of the site, measuring some
13 metres in diameter.

The site is freely accessible during day light hours, and there is a small area for parking
in the farm yard around a quater of a mile from the site.
Posted by The Cumbrian Castle listing. at 8:08 pm

A magic place. Was there a proper archaeological report? Caroline Walker