Carse Mote can be seen from the A711 at Tongland, about two miles North of Kirkcudbright. You can't really see these earthworks from the car as your driving, so it's best to park up and take a look. The best distance view, that gives you a good idea of the size and form of the site, is to walk back towards the power station on the banks of the River Dee. Through the trees, the view (shown below) can be seen.

Above. The earthworks from the A711 through the trees.

The summit of the mote is tree lined these days, but when it was in use, the hill side would most likely have been cleared of any vegetation, giving its occupants good clear fields of view across the countryside. The next best views are close up, and the mote can easily be accessed from the public footpath that runs along the South East banks of the river. Although the footpath isn't marked on the ordnance survey map, it is clearly sign posted. You can walk right up to the base of the earthworks, and as Scottish access laws are vastly different from English access laws, you can climb to the top of the mote and walk around the outlaying earthworks.

Above. Looking North East towards the summit of the mote.

On some old maps, the site is called 'the camp on the moat field', and although these days it looks distinctly round, it would most likely have originally been an almost square site. Ploughing and erosion have, over the years, rounded the edges of the summit of the mote.

Above. The tree lined summit of Carse Mote.

The summit may at one time have been around twenty one feet high, but only on one side does it now stand to anything nearing this height. The earthworks seem to be laid out in a classical Norman motte and bailey style settings....with a higher motte at one end, and a lower bailey area at the other...however, it is thought that this site pre-dates the Norman invasion of the British Isles.

Above. Another view of the tree lined summit.

The summit of the mote measures around 165 by 140 feet, with a break in the rim on the east side, possibly representing an entrance. The remnants of a bank and ditch survive to the North East of the mote, as shown in the photo below.

Above. The scant remains of ditches and banks at the North Eastern side of the earthworks.

I can't seem to find any dates for Carse Mote's creation, though some documentation points to it being an iron age hill fort rather than any sort of medieval site. This doesn't of course preclude it being used at some later point. 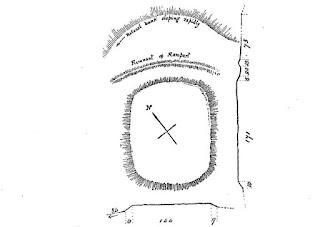 Above. Sketches and plans of Carse Mote\Motte from The Motes, Forts and Doons of the Stewartry of Kirkcudbright, by Frederick R. Coles

As this is easily reached via the public footpath from the road side, this site is well worth a visit.

Posted by The Cumbrian Castle listing. at 7:58 pm