Auchenmalg Tower\House
Auchenmalg
Near Glenluce
Dumfries and Galloway
The tiny hamlet of Auchenmalg lies about four miles South of Glenluce in the South West corner of Scotland. All that remains of this tower or house, are the footings of around two thirds of the square building, with the standing remains of one ruined gable wall. The ruins can be seen from the road side, about a hundred yards South of Broompark Farm. 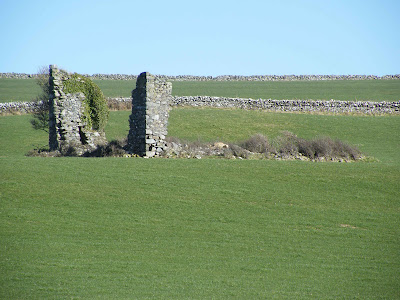 Above. View of the remains from the A747. 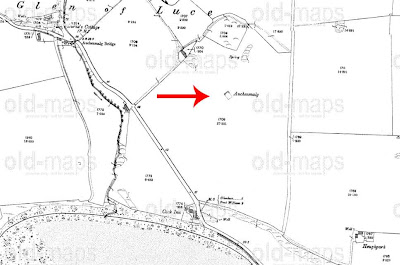 Above. OS map from 1895, showing the site of the tower or house of Auchenmalg.
Modern OS maps after 1895 do not name the ruins, and stop showing them after 1965. The only information I can find about this intriguing ruin, is that it was most likely once upon a time, the home to the Adairs of Genoch. Some sources are convinced that this was the site of a fortified house or tower, whilst others dismiss it as the ruins of a more recent house.
Posted by The Cumbrian Castle listing. at 5:34 pm