The Abbey at Shap, situated on the Western banks of the River Lowther, would have been a prosperous abbey in its heyday, and as such would most likely have had light security to safeguard its occupants and its finances and possessions. The abbey is known to have had a precinct wall, encircling the entire complex of buildings, but this has long since gone. Whether this would have been as spectacular and solid as the one that Sweatheart Abbey (Dumfries and Galloway) possessed, and which still stands in some sections, is unknown. (Check this link out.) 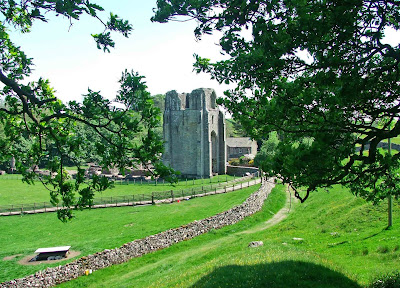 It's also known that the abbey would have had a gatehouse, situated on the grass track, probably on the right hand side of the wall, roughly opposite the sheep feeder in the next field (see above photo). As with any gatehouse or symbol of strength, this was most likely one of the first buildings to be removed, and consequently there is now no trace of this structure. 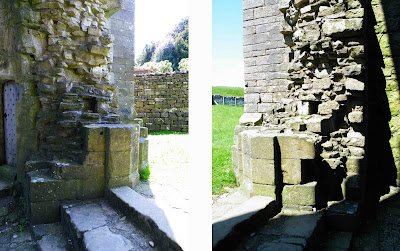 The huge 15th century tower, the most prominent remains of the abbey complex, sits at the West end of what was the nave. This huge tower, some 50 feet tall, has a huge draw bar tunnel in both of the door jambs. Only the lower portions of these jambs now remain, but the tunnels can still be seen. The tunnel in the left door, is now only about 4 inches deep, whilst the tunnel in the right hand jamb, is about 10 inches deep. They are about 8 inches square, so would have housed a sturdy draw bar. Both are lined with slate, and would undoubtedly have been much deeper when the whole of the retaining wall and the jambs were in place. The wall here is about 5 feet thick, so the occupants would have been able to make this entrance very secure. 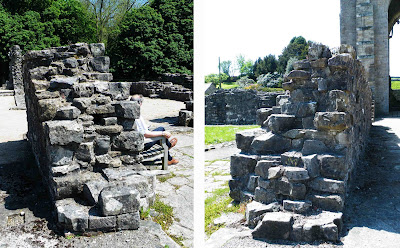 Another entrance, separating the nave from the Cloister (and hence the main living and storage areas of the abbey) also has a solid draw bar tunnel set within the depths of the wall. The tunnel is visible on both door jambs, and is around 5 inches square. The left hand tunnel is about 6 inches deep, whilst the right hand tunnel is badly damaged, and now only a few inches deep.
It's not possible to tell what sort of security would have been in existence on the buildings on the South West corner of the complex, as these have now been built over. This would have been an exposed section of the perimeter of the abbey precincts. The River Lowther would have provided an adequate boundary on the West flanks of the abbey, with the precinct wall running along the North, the West (incorporating the gatehouse) and possibly the now vanished Southern section. High up on the fells to the West of the abbey two dykes are still in existence. One runs roughly North to South, and is about 900 yards long, and a second runs West to North East, probably running behind the present farm buildings and almost down to the River Lowther. These may just be boundary dykes. As soon as they've been photographed, they'll appear on the blog.
Posted by The Cumbrian Castle listing. at 9:08 pm