Borrowdale is an area of outstanding beauty, situated some 6 miles North of Kendal, and only a few miles South of Shap summit on the A6. Whilst the area is well known for its walks, especially along Breasthigh Road which runs from the Eastern side of the A6, across the Western flanks of Borrowdale Common, and then on toward Bretherdale Head, there is also historical documentation stating that a plessicium, or slashed hedge was cultivated and maintained somewhere in this area. This barrier is reputed to have been created to slow down or prevent the Scots from moving South from Shap summit, in a grant dated 1180.
The wording is as follows "Grant by William de Lancaster II to the monks of St. Mary at Byland, of his part of Borgheredala (Borrowdale) by the great way which goes by Ernestan (Eagle-stone) to the plessicium which has been made on account of the Scots; and by the brow of the hill of Bannisdale, which is towards Borrowdale, as long as Bannisdale continues, and so to Borrowdale Head and so to the bounds of Westmorland, in perpetual alms, and for the settlement of the complaint which Wimund, late Bishop of the Isles, had against the father of the grantor."

A view of Borrowdale looking North.

The exact location of this rural defence has not been accurately pinpointed, though the old road that runs across Borrowdale Common would certainly have been a well used road in its day...before the A6 was constructed to its West. Any body of men that had climbed Shap summit to the North, would be looking for an easy track across both Shap Fells and Birkbeck Fells, and this road, rough as it would most likely have been, would have presented any traveller with an easier route over the boggy high ground, especially if there were men on horse back and wagons with supplies. 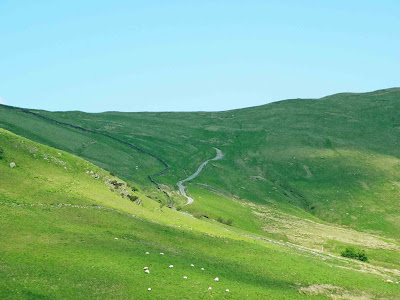 Above. Looking East towards North Side.
The road, now only used by walkers and hardy bikers, can be seen winding its way up the fell in the centre of the above photo. Parts of this road appear to have the remains of a low rampart or earthen bank, possibly all that is now left of the hedge that may have topped it at some point. This barrier would surely only have provided anyone moving South with a minor obstruction, and would most certainly have been without any fortifications along its route. It's also possible that the dyke may have been situated about half a mile South, where the valley narrows. This point, called Hollowgate would be much easier to build a barrier across. Perhaps the name is indicative of some early medieval 'checkpoint'....and the same could also be asked of Watchgate, about 3 miles further South. During the 16th century, the Scottish and English wardens of the border regions, instructed land owners on both sides of the border, to cultivate hedges of crab-apple, hawthorn and other thick growing and thorny bushes and trees, to dissuade reivers from raiding across the border and herding cattle, sheep and horses. It is thought that some of these hedges survive today and continue to show where certain land owners estates begin and end.
Posted by The Cumbrian Castle listing. at 8:36 pm