These earthworks, hidden from view from the nearby A66, were overgrown and difficult to make out with their covering of gorse bushes and the surrounding high hedges. The remains can be found in a field just off the A66, about two miles South of Appleby, on the banks of Hilton Beck where it converges with George Gill to form Coupland Beck.

From aerial photos, the earthworks appear to be square shaped, although inspection from the ground shows them to be nearly circular in shape, about four feet high, with a slightly dished interior, dipping to around one foot below the rim. Various internet sources mention a cross wall, or masonry...although when I visited, only a few stones were visible on the Northern edges of the earthworks.

If, as some sources say, this site represents the remains of a ring-work....it would have been a very small ring work indeed. I think these references are in fact related to another earthwork about a quarter of mile to the East. The earthworks are perhaps only 40 feet by 40 feet, the interior of which is tiny...and would only have been able to house a small building or a small number of people. As a defensive site, it is overlooked from the North by higher ground, but has clear line of sight over the beck to the East, and lower ground to the West and the South. Indeed, the West side of the earthworks drop away very steeply to the road some seven or eight feet below. 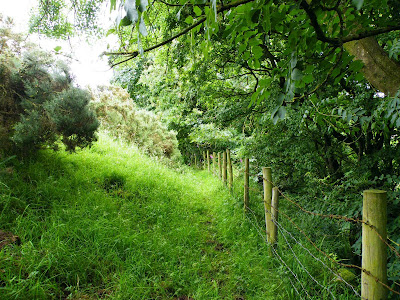 The above photos shows the fence that separates the earthworks from the steep drop to the road beyond. There don't appear to be any infilled ditches around the site, and no further banks or earthen ramparts anywhere else on the site. There are high banks running along side the banks of Hilton Beck to the East...perhaps indicating an attempt to shore up the banks from erosion, perhaps the remains of an attempt to prevent any incursion across the very shallow beck.
One interesting fact about this field though, is that the ordnance survey map shows the course of the old Roman road running North South through this field. If the route marked on the map is to be trusted, the old Roman road would have run just a few feet from the Eastern exterior of these earthworks....indeed, the profile of the field shows a distinct mound of earth (an agger) running the full North South length of it, clearly indicating where the road would have run. There is a slight depression between the Roman road and the earthworks. An 1863 map of Westmorland, clearly shows the earthworks next to the route of the Roman Road, and they are labelled as a Roman Fortress, so it's looking more and more unlikely that these remains represent a motte and bailey castle or medieval ring work.
Posted by The Cumbrian Castle listing. at 3:24 pm

The NMR records and bibliographic sources are confused. I suspect, based on the description in Nicolson, J. and Burn, R., 1777, History and Antiquites of Cumberland and Westmorland, that this "earthwork" is the buried remains of the foundations of a small round masonry tower. It is surprising how much collapsed stone buildings can look like an earthwork. The collapsed keep of Pevesney Castle Sussex was called a motte before it was excavated. I'm not the least convinced that this was in anyway a fortification and the tower may just represent a toll collectors hut.