Burton Hall
Warcop
Cumbria.
The only known remains of Burton Hall in Warcop, possibly a fortified manor house, now lay in the church yard of St Columba in Warcop. They conisist soley of a small portion of a window, and a doorway.
We know that the hall and the family that owned it were important in the area, as St Columba's had a Burton Hall chapel, as well as a chapel for the family from nearby Warcop Tower. 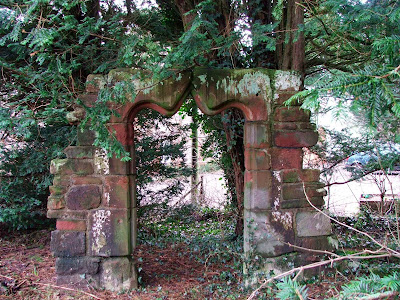 Above. The surviving doorway now in the church yard of St Columba.
The hall was situated in what is now the Warcop training army training area.....marked on the map as a 'Danger Area'. On the day I visited, tanks and machine guns could clearly be heard.

The remains of the door are thought to belong to the 15th century hall, now completely demolished, which originally lay about three quarters of a mile North of the A66. The map still shows that the earthworks of fish ponds survive to this day. The manor of Burton, which itself is about two miles North of Warcop, was originally held by the Burton family, until it passed to the Hiltons (who have a Burton Hall pew inside the church), and then finally to the Wyberghs of Clifton near Penrith (who have name and memorial plaques in the church at Clifton) 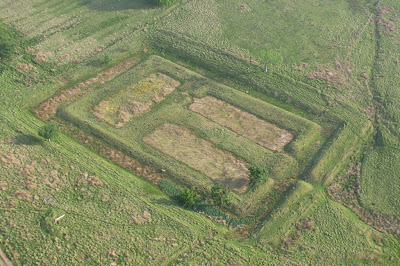 Above. Aerial view of the fish ponds, courtesy of Simon Ledingham.
Why the remains of the window (which I couldn't find) and the doorway were moved here, and not kept in the hamlet of Burton, I do not know....but the remains are an indication of the ornamentation instilled in the hall, and that has now obviously vanished. If you venture out to see the church at Warcop, the doorway is hidden in the undergrowth to the rear of the church, and backs onto the driveway of the old vicarage.
Posted by The Cumbrian Castle listing. at 2:49 pm

Hi,
I saw your pictures of Burton Hall and Dalton Old Hall. I am hoping you can help me with more information. My ancestor, Edward Whinnerah was the estate manager of Dalton Hall, Burton. They lived at Woodlands (built c.1914) which is now called Dalton House. My other ancestor WR Bradshaw lived at Burton Hall until 1914 at least. Any information that you can send me would be greatly appreciated. Hoping there are records for these places that would show my ancestors lived there and what dates.

Thank you so much.

Dear sir;thank you so much for this posting. I am a decendant of these Burtons My name is John Burton,one of my ancestors is in the bloodline of Sir Richard Francis Burton. The ancsetor from this area was John Campbell Burton and a William Edmund Burton. Thanks for the pics and post

There is what looks like another Burton Hall ogee sandstone doorway at Thornthwaite on the Helbeck Estate, I think put there in the late eighteenth century:
https://www.flickr.com/photos/tom-swailes/36505530352/in/datetaken/