Castle Tioram
Loch Moidart
Lochabar
Scotland
The remains of Castle Tioram (pronounced Cheerum) lay to the South East of the island of Eileen Shona, on a small tidal island. From this point, the castle's inhabitants would have been able to control sea borne traffic through the safe waters of Loch Moidart. 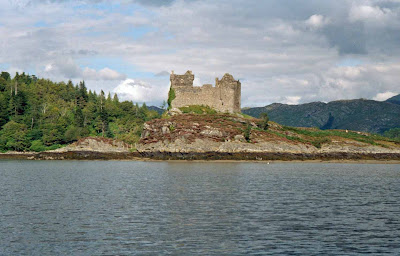 The castle was probably built in the early part of the 14th century and was the home of the MacDonalds. There is documentary evidence to suggest that there was a fortified building of some sort on the island some time before this. This early 13th century castle would have consisted of a simple curtain wall, within which would have been a collection of timber buildings. The walls have been built on the bedrock without any foundations! Sometime during the 14th century, the curtain wall's height was increased, and a tower house was added, built in stone against the east part of the curtain wall.
In 1715, during the Jacobite rising, the castle was set alight by the Scots, so that it wouldn't fall into the hands of the Hanoverian forces. Since its partial destruction it has been uninhabited. Although the castle is closed to the public, the island can be accessed and the external walls easily seen when walking around the island.
Photo courtesy of John Jefferies.
Posted by The Cumbrian Castle listing. at 10:40 pm