The Flodden Wall was a defensive barrier built around old Edinburgh soon after the defeat of the massed Scottish armies at the battle of Flodden in 1513. It was built as a reaction to the perceived threat of an English invasion of Scotland. The construction of the wall continued right through the 16th century, but it was a poorly planned and inefficient defensive barrier. During the 'Rough Wooing', Edinburgh was sacked by English forces, with the gates to the city being left opened by drunken Scottish guards (so the story goes!!) 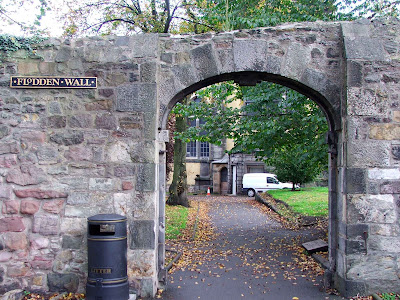 This sad and sorry photo is the only one I have of one of the remaining portions of the wall. This particular stretch once enclosed the whole of Greyfriars Kirk. Now it simply cuts the graveyard in half. As a consequence, one half of the graveyard is within the old city limits....the other is outside. From the middle of the 17th century the wall was dismantled piece by piece, as it was preventing the city from expanding to the South.

In July 2008, whilst building work was being undertaken at the King's Stables end of the Grassmarket, a small portion of the wall was unearthed. This small patch of the wall, now buried beneath the road foundations, has been marked with brass plates so that tourists can see where the wall was.

Posted by The Cumbrian Castle listing. at 11:12 pm