Gleaston Castle is situated about two miles West of Aldingham, with Scales to the North and Gleaston to the South. The castle sits in a field attached to a large farm. It is not accessable due to the ruinous state of the remains, but can be viewed extremely clearly from the road to the East. 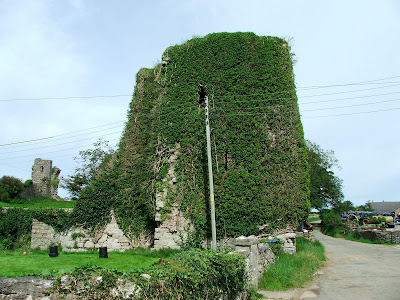 Above. View of the South East tower.
In 1297 John de Harrington I, Lord of Aldingham and Muchland began the construction of what is now the South-west Tower and part of the west wall ending with another tower, although the site had been inhabited since the early part of the 13th century.
In 1325, the building of the present day castle was started by either John de Harrington I or his son John de Harrington II. The building work was completed in around 1340. The castle was inhabited by the de Harrington family for 118 years until, in 1457, William de Harrington, last Lord Harrington of Aldingham and Muchland, died with no heir. The castle and estate passed to Lord William Bonvilla and eventually passed by marriage to Thomas Grey, great-grandfather of Lady Jane Grey. It was during this time that the castle gradually fell into rapid decay. Thomas Preston purchased the castle and ‘renovated’ one of the towers in which he lived for a number of years. 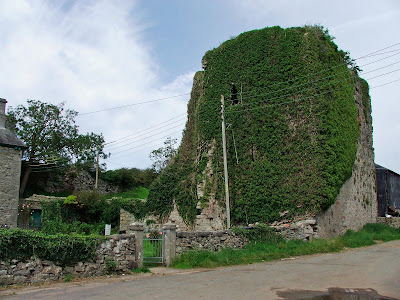 Above. Another view of the South East tower.
The Preston family retained ownership of the castle until around 1639 when it seems that a Richard Gaitskell was living in the castle, possibly occupying one of the South towers. He may have occupied the site until the 1690's.
The ruin later passed to the Cavendish family, and was sold by Lord Richard Cavendish of Holker Hall to Thomas Barton Jackson, of Bolton Manor, Urswick, a local farmer, on the 14th February 1920. It was bought by William Simpson Webster Snr in 1926 and is currently owned by his son, William Simpson Webster Jnr and is still part of a working farm.The castle is a very simple lay out, with a large curtain wall running the full circuit of the castle, two corner towers, one at the South West corner and one a the South East corner, a large keep at the North West corner, and a gateway through the East wall. The state of the remains vary considerably. The keep is fairly ruinous and now consists of two ruined walls with no roof. The corner towers have both been incorporated into the farm buildings, and are still fairly solid. The curatin wall on the road side has been demolished and only a dry stone walls survives in its place. The North wall and the South wall are both now gone, and only portions of the West and East wall survive. All in all, it's a spectacular castle, with substantial, if ruined, remains. 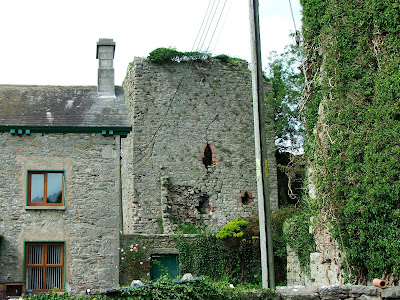 Above. View of the South West tower (left) and the West tower (right)
2007 photos of Gleaston Castle. 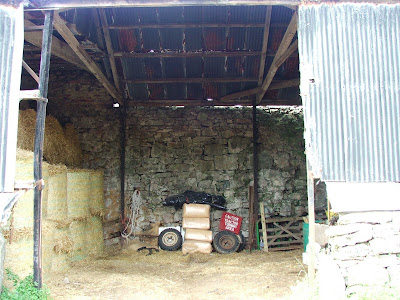 Above. View of the Eastern portion of the curtain wall, now built into the field wall\farm boundary. 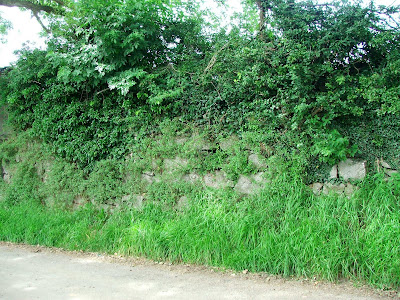 The wall that seperates the road from the castle courtyard is made up of the lower few feet of the remains of the curtain wall....either in its original make-up, or rebuilt for this purpose. Part of the wall has also been incorporated into the cow barn that is built on the verge of the road. 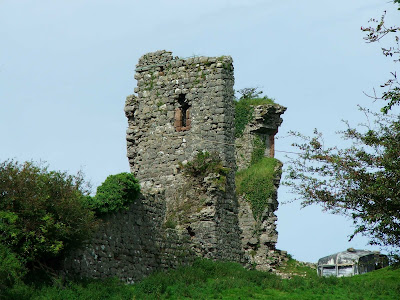 This photo shows the remains of the North East tower...now in a very ruinous state. The sandstone window still remains in-situ, as is the case on many of the higher windows in the castle ruins. 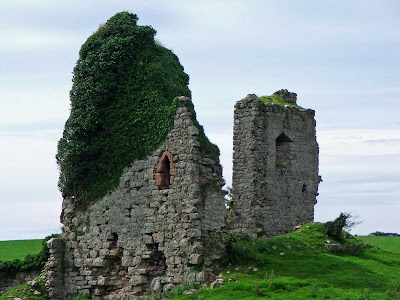 The South East tower remains are also in a perilous state. 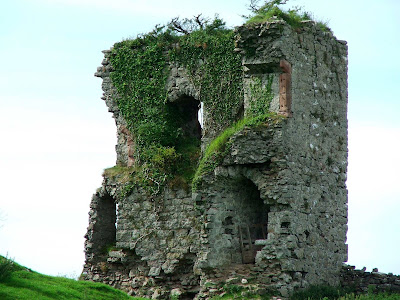 The rear of the South East tower is still intact enough to be able to see passageways, windows and walkways built within the walls.
There still appears to have been no work done on the remains at Gleaston castle by English Heritage, although judging by the state of the ruins, it would not only be a costly exercise, it would be a challenging project for anyone to undertake.
Posted by The Cumbrian Castle listing. at 2:17 pm

The castle is on the Buildings at Risk Register and described as in 'very bad' condition. They also comment "A feasibility study was completed in 1998 and discussions are taking place regarding a scheme of consolidation." 11 years of discussion does not sound very constructive. ref. http://risk.english-heritage.org.uk/default.aspx?id=1010&rt=0&pn=1&st=a&ctype=all&crit=gleaston