The keep, stood on its motte and surrounded by its bailey, represent the core of Scarborough castle. The wall and ditch were built in the 12th century by Henry II and were designed to create a secure enclosure within the confines of the fortified summit of the headland.

Above. A view of the keep over the Eastern wall and ditch.


The circumference of the bailey area measures approximately 250 meters. The keep was probably an addition to an already busy area, populated with both stone and wooden buildings. 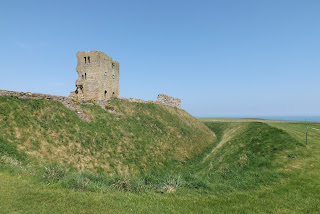 Above. The keep above the Eastern ditch.


There were two gates into the inner bailey area of the castle. Both can still be seen to some extent. The first lies at the North end of the bailey near to the Master Gunner's house, and the other lies at the South end abutting the wall. 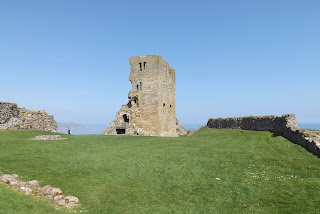 Above. The keep viewed from within the bailey.

The well in the centre of the bailey is quite impressive. It is around 46 metres deep, and is stone clad to an overall depth of around 20 metres.

Above. View of the bailey, with the Keep to the right.


Any buildings within the bailey were most likely demolished by King John in the 13th century, leaving the castle's Keep standing almost alone.
Posted by The Cumbrian Castle listing. at 9:49 am