The barbican, gatehouse and associated walls, provide Scarborough Castle with 230 metres of first line defences. The formidable stone built walls, towers and bridges (with wooden drawbridges originally) lie at the Eastern end of the castle, spanning the narrow ridge that allows access to the plateau on which the castle is built.

Above. Panoramic view of Scarborough from the West walls.


Unfortunately, as at many major ruined castles, the gatehouse has long since been demolished, no doubt of symbol of the removal of any authority the castle may have had over its local environs. The photo below shows the only remaining portion of stone work associated with this once great structure. 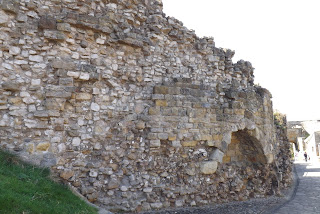 Above. View of the remains of part of the Gatehouse.


The gatehouse was directly connected to the curtain walls, and would have provided a second line of defence against any attack on the castle. 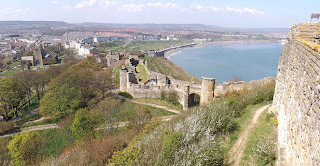 Above. The Gatehouse and Barbican from the West walls.


The view in the photo above, shows the extremely narrow entry way into the castle that the the barbican and its associated bridges would have allowed into the castle. Adding in the existence of draw bridges across the barbican's bridges, and this restricted entry way becomes an easily defended point of access. 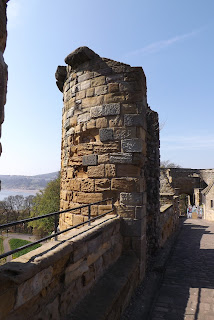 Above. Remains of one of the Barbican's towers.


The Barbican and Gatehouse were important elements of the external defences of Scarborough Castle, which is possibly one reason that the gatehouse has been all but demolished, leaving us with a single mass of masonry standing to your right as you enter the castle.

Posted by The Cumbrian Castle listing. at 9:32 am

Pleased to see this fascinating source of information and images (certainly on my favourite topic) is still going strong - hats off to you Matthew esp. in exploring and recording some of those remote earthwork sites in Galloway, etc.

Thought I'd just posted my comment! If not, my thanks for this blog and esp. the earthwork sites in Galloway - some of which I've gone to see myself now.