The remains of Ulpha Old Hall lay to the North of the Duddon valley, and the to the West of Coniston. This is a beautiful part of West Cumbria. 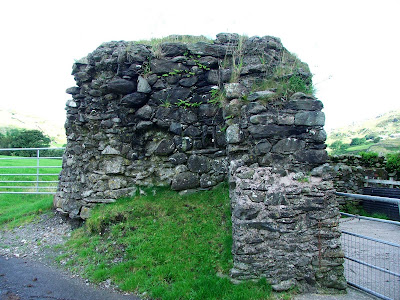 The remains consist of the east facing wall with the open remains of the main doorway, upstanding walls to the north, south and east (although only to about ground floor height) and several pieces of disconnected wall. The surviving portions of wall are are around 1.2m thick, but the wall with two surviving fire places is about 1.6m thick, no doubt in order to provide additional protection in the weakened part of the building. 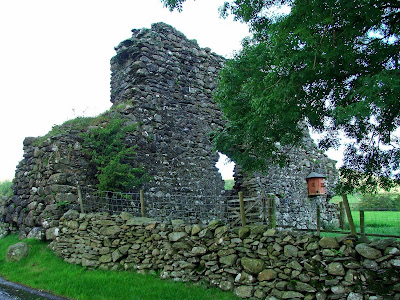 It's believed that the tower was built sometime between 1580 and 1620, rather late for a pele tower, perhaps indicating a purely secure building rather than a defensive building. In three portions of the walls, there are small looped windows...small enough to see out of, and perhaps fire a weapon, but too small to gain entry. Documentation on the internet seems to suggest that the ruins were\are due for demolition. Thankfully this hasn't happened and hopefully the remains will survive even longer. 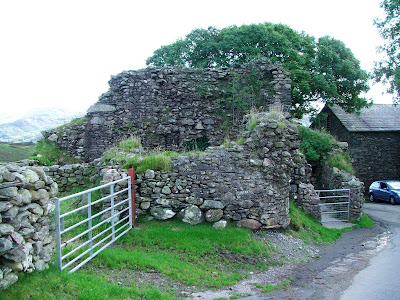 The highest surviving portion of the building can be seen below. The thickness of the walls is clearly visible here. 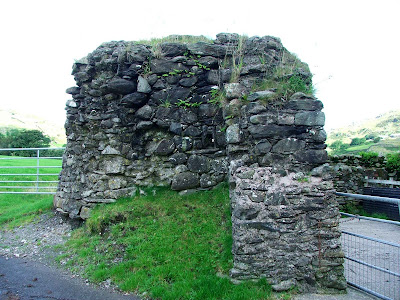 The photo above shows a portion of the corner of the tower, with a small gun loop visible. The remains sit in a field at the side of the road, affording excellent views.
Posted by The Cumbrian Castle listing. at 5:08 pm