The remains of Castle Haugh sit next to the River Ribble (to the West) and the A682 (to the East) The castle looks out over a crossing of the river, and there is likely another motte defending a ford some way South West on the opposite banks of the river.

The castle was most likely established by William de Percy sometime in the 11th century.

The remains consist of a motte standing to around 6m high, eroded to the West where it fronts onto the cliff overlooking the river, and partly damaged. The summit of the motte is dished, either through quarrying or as a result of the removal of a small building\tower. The bailey has been lost to the river below it. 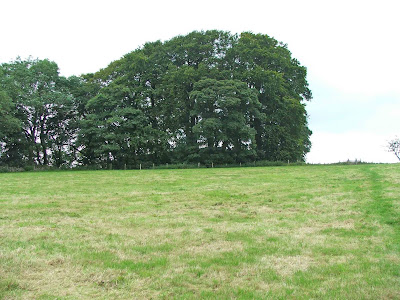 The motte is surrounded by a well preserved ditch which is around 2m deep in some places.

The site is easily accessable via a footpath that passes right next to the foot of the motte. Be aware though, that there is no parking near the site. The A682 at this point is is very narrow and busy.
Posted by The Cumbrian Castle listing. at 8:56 pm

Castle Haugh is on the Ribble Way footpath. Today (26 Feb. 2009) nine of us did an easy walk (5 mls) from Paythorne then to the West, turning South and then East to Gisburn Park and North up the Ribble Way back to Paythorne. Castle Haugh offers a sheltered spot for lunch.